A watch with precision on Earth and in outer space – how many brands can say they’ve tested their timepieces outside our atmosphere? The answer – just one. Since its launch more than half a century ago, the Omega Speedmaster Chronograph has been known for its robust reliability, timeless design and oh yeah, it’s exploration in space.

Chronographs were originally built and advertised as tools for engineers, technicians, doctors and athletes – a way of keeping seconds, much like a stop watch – which made them less appealing as men’s casual wear. However, these qualities made the Speedmaster the perfect watch for marking some of America’s greatest achievements – including the first successful trip to the Moon.

In 1962, President John F. Kennedy challenged the American public to support his mission to send a man to the moon (and return him home safely). His “We Choose to Go to the Moon” speech was particularly audacious considering that, at the time, only one American man had launched in to space and spent a mere 15 minutes in orbit.

At the time of JFK’s speech, the first Omega watch made its debut in space, when astronaut Walter Schirra wore his personal Speedmaster during the Sigma 7 mission of the Mercury Program. Inspired by Schirra’s exploration, Omega adjusted the design of the Speedmaster’s case to accommodate larger pushers for easier stops and starts and easily readable white hour and minute hand markers (that still exist today).

Two and a half years after Schirra’s original mission, NASA requested quotes for wrist chronographs that could withstand the elements of space. Omega submitted the Speedmaster for NASA’s performance testing and was pitted against three other brands. NASA’s tests on the chronographs were designed to destroy the watches. From high pressure to high humidity, the tests challenged every aspect of the watches’ performance and in the end, only one watch survived – the Speedmaster. 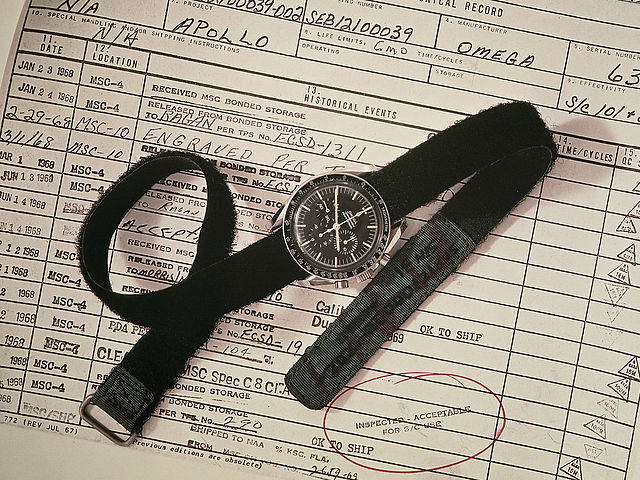 July 21st, 1969 marked one the most famous days in American history as Apollo 11 safely landed on the moon. A mere six hours after landing, commander Neil Armstrong and pilot Buzz Aldrin took the very first human steps on the Moon’s lunar surface. While wearing a NASA issued Speedmaster, Armstrong spent several hours collecting rock samples before returning to the spacecraft to make the long journey home. Armstrong and Aldrin used the Speedmaster’s chronograph to time oxygen and fuel burn during their mission, which was critical in returning safely to Earth.

The Speedmaster earned the nickname “Moonwatch” after Apollo 11 and the following six lunar landings by American astronauts. It gained worldwide recognition and was even worn during the Apollo and Soyuz docking by both American and Soviet Union astronauts. In fact, the Omega Speedmaster Chronograph has been the only piece of equipment used in all of NASA’s space exploration from Gemini to the International Space Station program.

The Omega Speedmaster has been the choice of astronauts and space agencies for more than half a century. Today, the timepiece is powered by the same hand-wound movement that powered the timepieces NASA’s astronauts wore in the 1960’s.

With its black dial and distinct tachymeter scale around the bezel (a scale used to compute a speed based on travel time), the Omega Speedmaster Chronograph was designed for function and beauty. The 42mm stainless steel case houses indexes and white center hour and minute hands that have been coated in Super LumiNova (allowing for legibility in the dark). The dial showcases a 30-minute recorder, a 12-hour recorder and a small seconds sub-dial. The watch is completed with hesalite crystal and matching stainless steel bracelet or black leather strap. 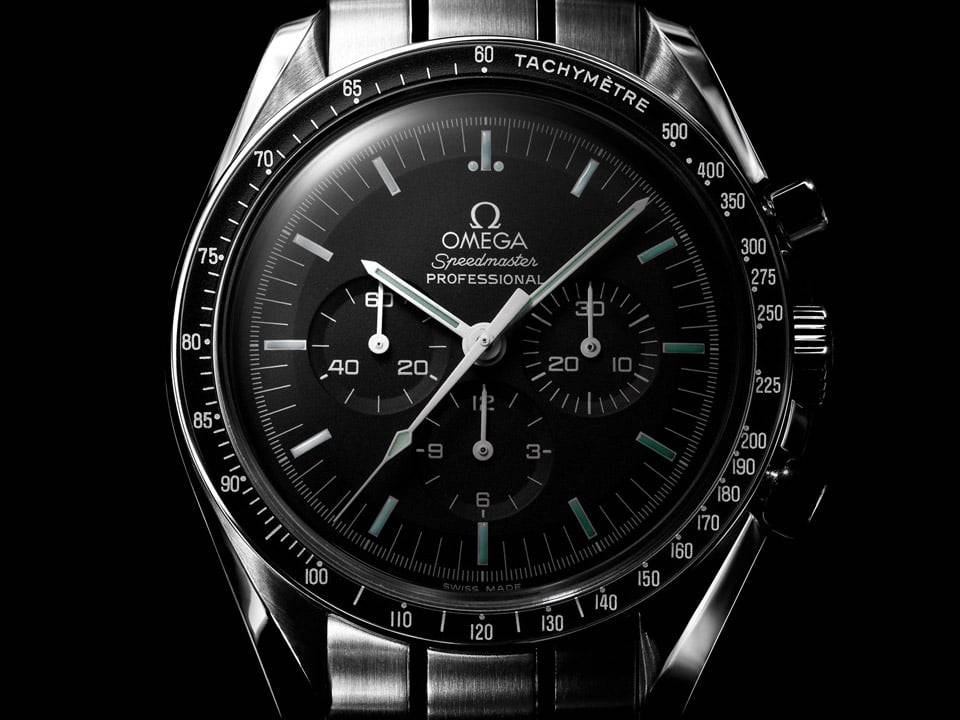 Each Omega Speedmaster is individually numbered, so it can be traced to a particular space in time. The stainless steel caseback is also embossed with the original 1962 Omega Seahorse medallion.

As a tribute to it’s heritage, Omega developed a “NATO” strap, a strap for astronauts and the tools for changing out all the bracelets depending on your preference. Omega has also developed other versions of the Speedmaster including the Speedmaster Dark Side of the Moon, the Speedmaster Grey Side of the Moon and the Speedmaster Apollo 11 Anniversary Limited Edition. One particular timepiece to keep an eye out for is the Sedna gold version that features the words “THE FIRST OMEGA IN SPACE “, “OCTOBER 3, 1962” engraved on the back.

Want to Take a Closer Look at a Piece of History?

Feel free to come into a Shreve & Co store and take a look at the original “Moonwatch” or any of its sister models. All of our staff are ready and willing to show you the features used by Armstrong and Aldrin during their missions but if you are looking to know more about Omega’s journey to space, Tony in our Palo Alto location. You can also schedule an appointment here.