With the annual Salon International de la Haute Horlogerie upcoming in Geneva this January, the watchmaking world is eager with anticipation of all the timepiece announcements that follow this international showcase of the finest watchmakers on the planet. Among the presenters is IWC, who has shared four upcoming models from their Pilot’s collection that will make their debut at SIHH 2019. These new editions to the Pilot’s Watch family demonstrate the modern technology available to IWC while maintaining the excellence in watchmaking and style for which the brand has become known. Demonstrating several firsts for IWC (first Ceratanium case, first chronograph to get a 69000-series movement, first constant force tourbillon, and first red hard gold case), the new Pilot’s Watch releases are sure to delight when they make their Geneva debut in the coming weeks. 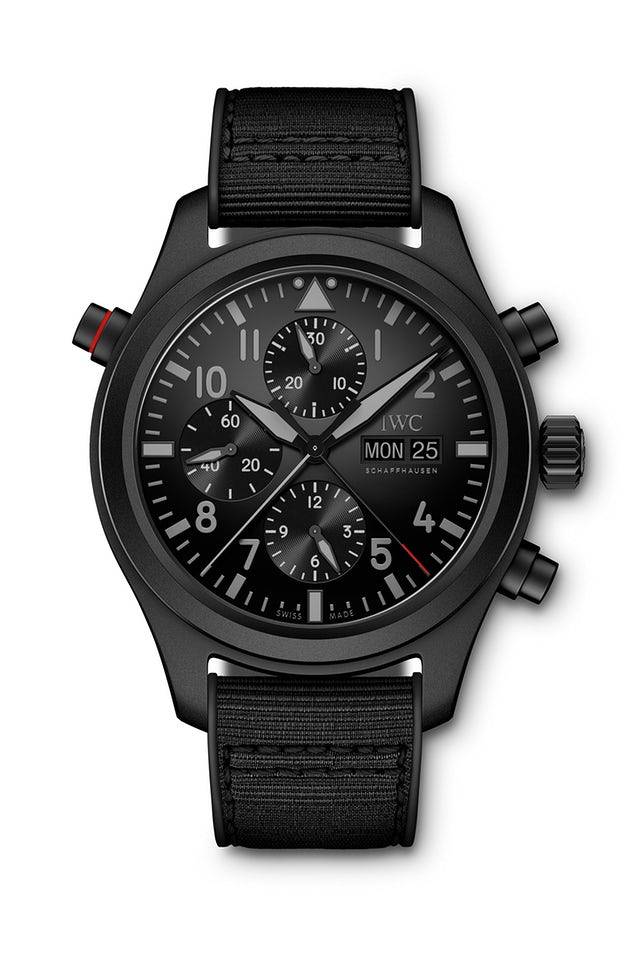 Crafted of a composite material which offers the scratch resistance of ceramic with the light weight and high strength of titanium, Ceratanium is an IWC patented material which makes a first appearance on the 2019 IWC Pilot’s Watch Double Chronograph Top Gun Ceratanium. The 44m case has been given a matte black stealth treatment which is matched on the hands, dial, and strap. The Double Chronograph Top Gun is powered by IWC’s 79230 movement. The rattrapante movement is protected by a soft-iron inner case which provides additional anti-magnetism to the timepiece. Pricing has yet to be announced, but IWC says this stealth Top Gun Ceratanium piece will retail for around $15,000. 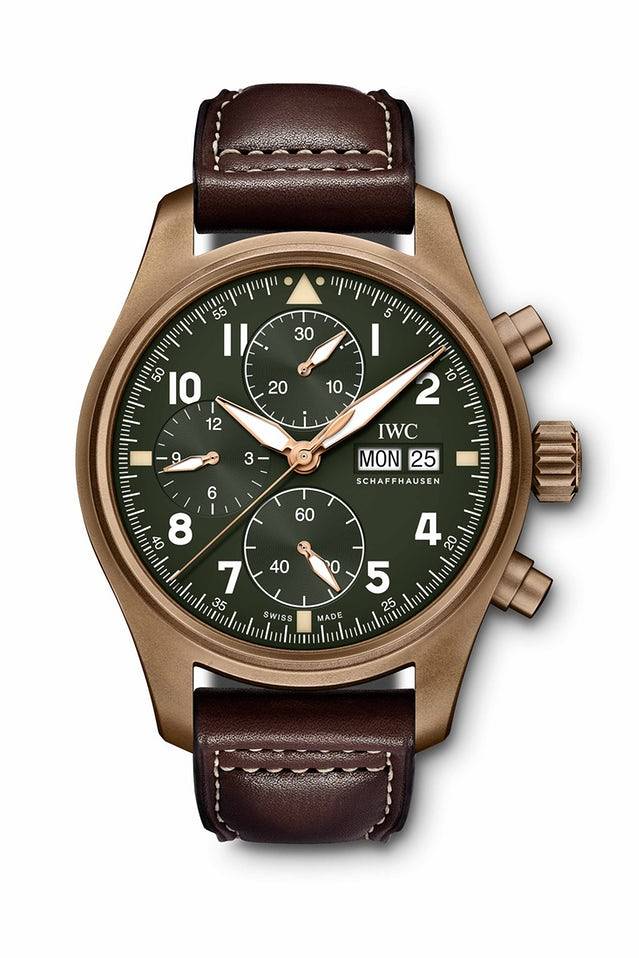 The Chronograph Spitfire in Bronze looks and feels like a classic Pilot’s Watch Chronograph offering from IWC. The difference is in the details. The materials and movement used, along with an adjusted color palette, set this timepiece apart as something truly unique. The warm bronze case measures 41mm with a thickness of 15.3mm. Water resistant to 60m with a titanium case back, the Spitfire is powered by IWC’s 69380 in-house movement. The column-wheel chronograph movement is the first use of a 69000-series movement in a 41mm case offering. The olive-green dial is offset by bronze accents and white numerals, giving the Spitfire Bronze a classic style reminiscent of the name. Official details will be announced at SIHH, but the Spitfire Chronograph Bronze should retail for around $6,250. 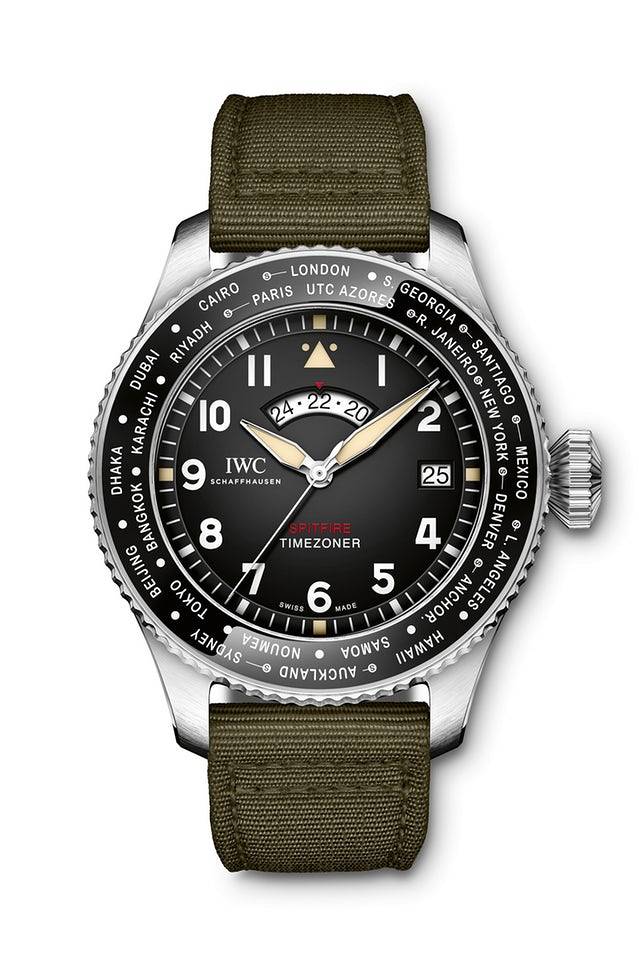 Paying homage to a revolutionary project to restore an original spitfire fighter jet and fly it around the world, the IWC Pilot’s Watch Timezoner Spitfire Edition “The Longest Flight” will be limited to 250 pieces. Constructed of steel, the 46mm case is complemented by a black dial with green textile strap and aged lume accents, harkening back to the famed styling of the classic fighter jet. Powered by IWC’s new 82760 movement, the Longest Flight Timezoner has a 24-hour display just under the 12 o’clock position. The Timezoner uses a unique bezel operation to track global time. Twisting the bezel moves the local hour hand, 24-hour hand, and date, updating the local time and the world time tracking in one movement. This very mechanical feeling complication paired with a larger watch gives the Timezoner a substantial feel and a simplicity of appearance. The complication is an example of function and form over grandiose and complex. The Timezone Spitfire Edition “The Longest Flight” is a unique time zone complication with classic styling which is sure to attract attention at this year’s SIHH. 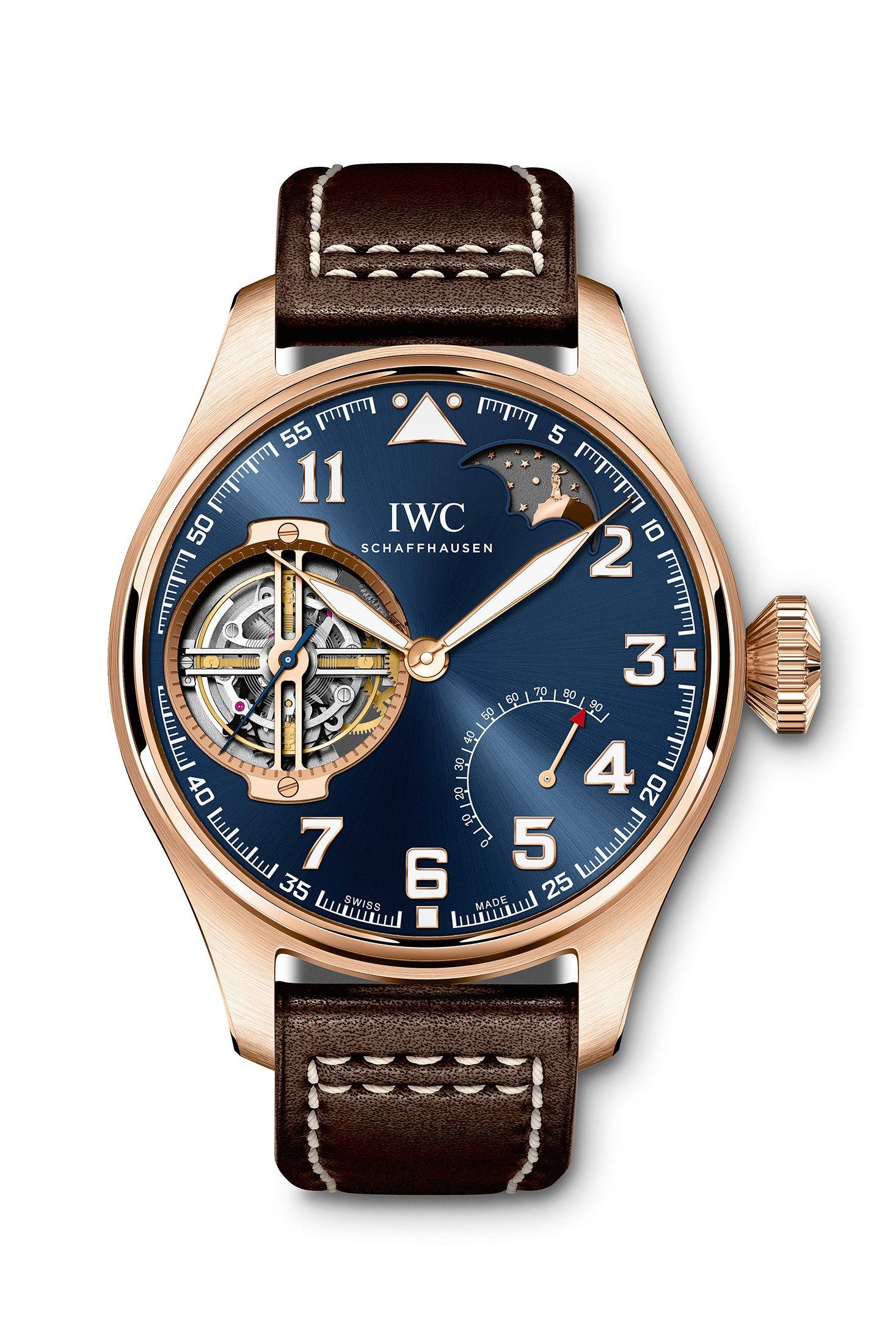 The IWC Big Pilot’s Watch Constant-Force Tourbillon Edition “Le Petite Prince” is full of firsts for the watchmaker. It will be the first timepiece offered in a “red hard gold” case, with IWC stating that the special alloy is substantially more scratch resistant (5-10 times more) than normal red gold. The limited edition will also be the first Pilot’s Watch to feature a constant-force tourbillon. Limited to only 10 pieces and receiving the radiant blue dial which is the hallmark of the “Le Petite Prince” special editions, the Constant-Force Tourbillon Edition will be housed in a 46.2mm hard gold case and powered by the IWC 94895 movement. The movement uses a constant-force system combined with a tourbillon for enhanced accuracy. The hand-wound movement provides 96-hours of power reserve thanks to twin barrels.Moon phase is displayed at the one o’clock position, with a power reserve meter located between the four and five o’clock position. The tourbillon is shown caged in red gold at the 9 o’clock position, in stark contrast to the classic blue dial found on the Le Petite Prince editions from IWC. The crystal case back reveals the detail and craftsmanship which goes into each of these unique timepieces. As expected of a very limited release Le Petite Prince edition, the Big Pilot’s Watch Constant-Force Tourbillon Edition will be pricey, with IWC estimating a retail cost of $235,000. This watch will truly put the Haute Horlogerie in SIHH 2019.