Piaget set a record when it introduced the world’s thinnest hand-wound watch in 2011. Measuring in at 5.25mm, the Altiplano held the record until Baselworld 2017, when Bulgari introduced the Octo Finissimo Automatic, measuring 5.15mm in thickness and claiming the crown of world’s thinnest. It seems that Piaget spent the remainder of 2017 slimming down for the new year, and the result is a world-beater once again.

In a race to be the slimmest of them all, Piaget may have just introduced the end-all and be-all of ultra-thin watches. The Piaget Altiplano Ultimate Automatic 910P restores the crown to Piaget and is set to officially debut at Salon International De La Haute Horlogerie Geneva (SIHH) in 2018 this week. 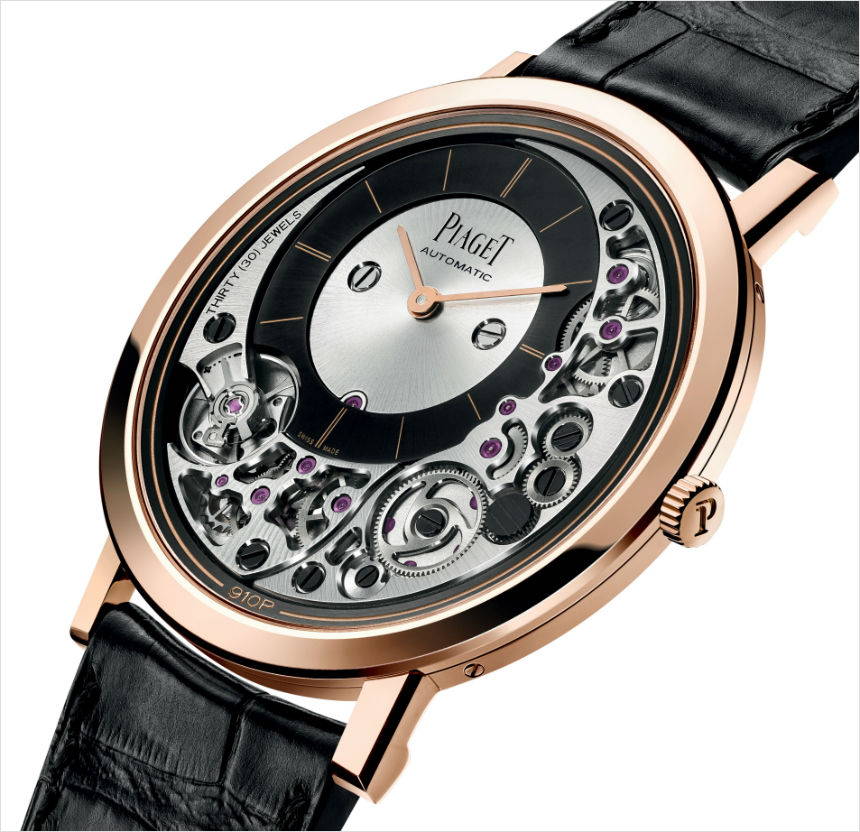 Measuring in at an astounding 4.30mm thick, the Altiplano Ultimate Automatic 910P is nearly one full millimeter thinner than the previous record holder. This should come as no surprise as Piaget is renowned for manufacturing super-thin timepieces. The brand has long been associated with ultra-thin watches and holds records in several horological categories.

Piaget introduced the caliber 9P in 1957, making it the thinnest movement of the time at just 2mm. The automatic caliber 12P, introduced in 1960, was a mere 2.3mm in thickness. The Altiplano 900P is the slimmest mechanical movement watch in the world with a case thickness of 3.65mm, and the technology which allowed such thinness was critical to the development of the Altiplano Ultimate Automatic 910P. 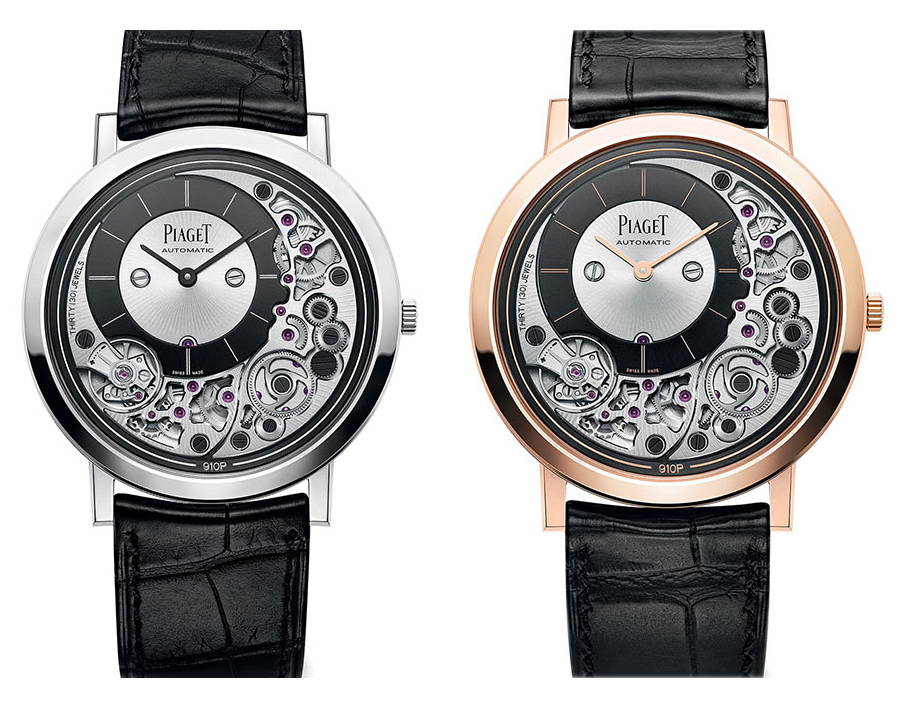 Available in rose or white gold and featuring the new ultra-thin automatic movement of the caliber 910P, the Piaget Altiplano Ultimate Automatic holds the same secret to thinness as the hand-wound Altiplano 900, on which the 910P movement is based. The case of the timepiece also functions as the baseplate, meaning there is no conventional movement placed in a case, but rather a fusion of the two entities. This design solution for ultra-thin watches was originally pioneered by Audemars Piguet in 1986 for the introduction of the automatic tourbillon caliber 2870, which measured 4.8mm in thickness.

The Piaget Altiplano Ultimate Automatic 910P uses a peripheral rotor for the automatic winding system, which allows the rotor to lie on the same plane as the gear train, helping to further reduce the thickness of the movement. The peripheral rotor means the 910P is slightly wider, at 41mm, than the 900P movement. The 910P is comprised of 238 individual components with some of the wheels measuring a scant .12mm thick. 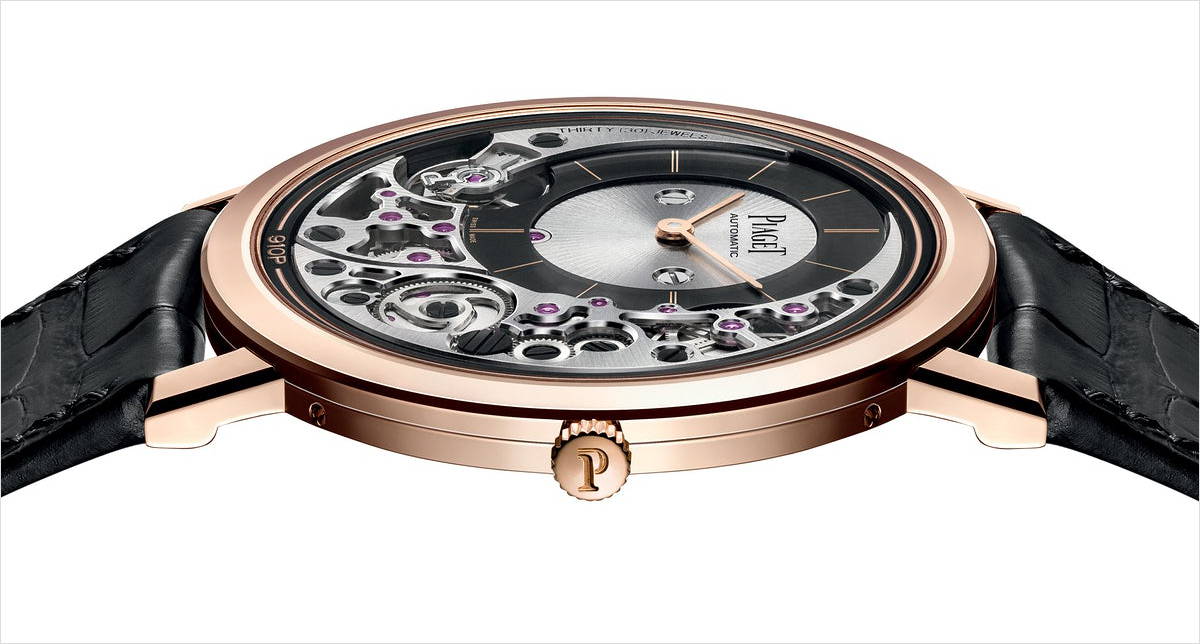 Despite the exceptional thinness of the timepiece, it features an impressive 50-hour power reserve. The time display dial is eccentrically placed, allowing for the movement to occupy the same plane as the dial. This presented a unique challenge which was expertly solved by Piaget. The dial hands are slightly recessed below the surrounding bridges. When there is excessive pressure on the crystal, a very slight curvature of the case occurs, and these bridges around the dial protect the hands from coming into contact with the crystal.

With the official unveiling of the Piaget Altiplano Ultimate Automatic 910P at SIHH this week, Piaget will once again take the crown for world’s thinnest automatic timepiece. While the 910P is a feat of modern engineering and design, the finishing work expected of a Piaget timepiece is what sets the watch apart. Alternately sunburst and satin finished wheels are accompanied by chamfered bridges and black PVD coated screws in the movement. The mixture of thinness and finish makes the Altiplano stand head and shoulders above the other timepieces in it’s class, even if that additional height is measured in tenths of millimeters.

Are you ready to slim down in 2018? You will certainly have to wait for the Altiplano Ultimate Automatic 910P but you check out a wide selection of ultra thin watches are either of our California locations today.