You’ve mostly likely overheard the name Mikimoto at a cocktail party or in a fine jewelry store or even on a PBS documentary, and often phrased as “these are my Mikimotos,” but what makes the brand synonymous with the world’s finest quality cultured pearls?

Since 1893, 41 years after Shreve & Company established itself in San Francisco, Kokichi Mikimoto founded his company with the dream of adorning the necks of women all around the world with pearls. Mikimoto had been an entrepreneur since the young age of 11 when his father fell ill, propelling him to seek fortune in an ever changing and modernizing world. He took special interest in his hometown’s most famous export, Ise Pearls. Because these natural pearls were in such high demand, they were harvested at an alarming rate nearly causing extinction to the oysters themselves. Thus, Mikimoto embarked on an alternative way of cultivating pearls through the development of sustainable, protected oyster beds. 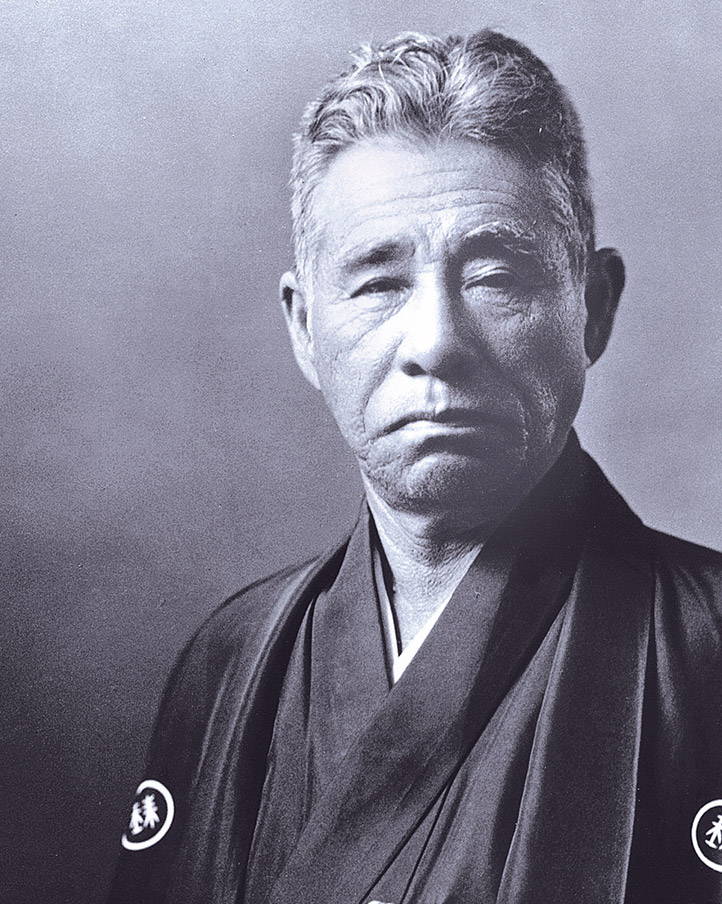 A portrait of Kokichi Mikimoto, Courtesy of Mikimoto America

As a perfectionist, Mikimoto was disturbed by the pearl industry’s disregard for color, shape and quality. He learned that Akoya oysters produced the finest pearls in the world. He explored methods of introducing particles into the oysters that helped them to create lustrous, perfectly round gems. In 1893, after many years of failed experiments and natural disasters, Mikimoto and his wife discovered the company’s first pearl in their oyster beds.

With his dream finally becoming a reality, Mikimoto was granted the first patent for cultured pearls in 1896. He established his flourishing business on Oijma Island, now more commonly known as Pearl Island. In the decades to come, Mikimoto continued to advance the science of pearl creation and conquer new challenges such as the cultivation of the South Sea pearl.

Over time, the world became infatuated with Mikimoto’s creations. In 1910, a traditional Japanese fan and screen with Mikimoto cultured pearls was featured at the Anglo-Japanese Fair in London. In 1927, Kokichi Mikimoto met fellow inventor, Thomas Edison, at his home in New Jersey. After admiring Mikimoto’s work, Edison remarked, “There are two things which couldn’t be made in my laboratory – diamonds and pearls.” His reach stretched even farther during the 1939 New York World’s Fair, which featured the Philadelphia Liberty Bell studded with 12,250 pearls and 366 diamonds and was nicknamed “the Million Dollar Bell”. The bell is now on display at the Mikimoto Pearl Museum in Japan. 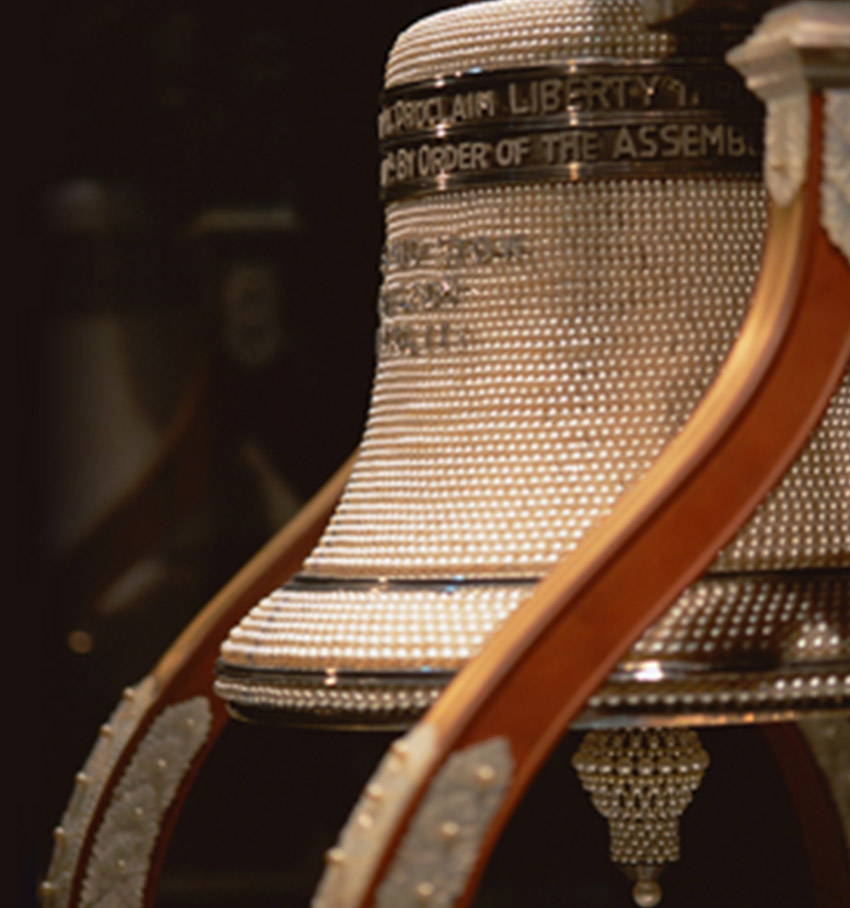 As the inventor of cultured pearls, Mikimoto embodied Japan’s reputation for quality goods and helped to build the country’s global trade. Upon his death at the age of 96, Mikimoto was awarded the Grand Cordon of the Order of the Sacred Treasure. Today, his brand and his vision live on in the company’s superb quality and elegant designs.

So, Mikimoto was the first to craft the cultured pearl, why does that matter?

It’s important to note that Mikimoto angered a lot of people during his quest to develop the world’s finest cultured pearls. Think about it, at the time, the world’s pearl market consisted mainly of natural pearls which were expensive to extract and even more expensive to purchase. When cultured pearls were introduced to the market, they were more beautiful, consistently round, and less expensive than their rarer counterparts. Mikimoto sent a message to other dealers in 1932, by shoveling inferior pearls into a fire in front of the Kobe Chamber of Commerce. Foreign journalists based in Kobe communicated his message to the world. Mikimoto was then sued by other dealers for advertising his pearls as “natural pearls”. The lawsuit led to the creation of the term “cultured pearl” to help differentiate his pearls from the rest of the world.

Ironically, now, when someone asks “Are those cultured pearls?” they are really asking, “Are they real?” Originally, the term was meant to denote Mikimotopearls as not natural (and thus not as prestigious) but the definition has changed over time due to the overwhelming number of fraudulent pearls on the market. Mikimoto continues to uphold its founder meticulous eye for detail and guarantees that all of their pearls are truly authentic. In other words, you are guaranteed excellence when purchasing a piece of Mikimoto pearls.

The 5 Factors that Contribute to a Pearl’s Worth

There are 5 commonly known factors that help jewelers to determine a pearl’s worth: luster, shape, color, surface blemishing and size. Only the finest quality pearls with the highest ratings in each of the factors can carry the Mikimoto name.

The biggest factor in value, so pay close attention. Luster measures the rate of reflection on a pearl’s surface and the amount of light reflected. A good question to ask is “How crisp and detailed is my reflection in these pearls?” Luster makes or breaks pearls as a precious gemstone – pearls without brilliant luster can end up looking like painted beads. The bottom line, the brighter, sharper and more reflective a pearl is, the more valuable it will be.

This is one of the easiest factors to see with the naked eye because generally the more perfectly round in shape a pearl is, the more rare it is. However, some pearl connoisseurs enjoy the uniqueness of baroque pearls which are often off-round, drop and asymmetrical in shape, and are graded according to symmetry.

While many prefer the classic white “Audrey Hepburn” pearl, they actually come in a variety of colors based on the type of oysters that produce them. The rarer the shade, the more valuable the pearl. Colors range from cream, pink and grey to black, green and blue. White and pink rosé are among the most popular Akoya colors while peacock green and gold are among the rarest South Sea shades. While color choice is a matter of personal preference, always look for rich color, evenly distributed throughout the pearl.

Similar to inclusions in diamonds, pearls are evaluated for pin-pricks, scoring marks, chalky spots, wrinkles and other blemishes. Pearls with cleaner surfaces are valued more highly but it is important to note that pearls are a product of nature, there will always be some form of blemish even if you can’t see them with the naked eye.

Like diamonds, pearls that are larger in size are much rarer and more valuable (all other value factors being equal) than those that are not. Pearls are measured in diameter increments of millimeters (mm). The classic Akoya cultured pearl generally ranges from 3mm to 10mm. South Sea cultured pearls begin at 8mm and can grow as large as 18mm. The majority of cultured pearls harvested typically range between 6mm – 10mm in size. Pearls larger than 10mm are typically found in the wild, but are not as lustrous, colorful or round as cultured pearls.

This factor describes how well pearls are matched within a pair of earrings or a necklace strand. For Akoya pearls, matching must be near perfect with little to no variation in the 5 other factors listed above. South Sea pearls are often featured in graduated strands and showcase multiple colors as it is much more difficult to find identical gems.

Currently, there is no internationally agreed upon grading scale for pearls which means that grading is often subjective. The most common scale, A-AAAA, isn’t properly described by dealers, and customers who are new to pearls and are unfamiliar with the intricacies of pearl grading end up disappointed. However, Mikimoto developed their own proprietary grading scale to maintain absolute consistency and fairness of value for its consumers. So, there is no need to worry that you are purchasing a AAA and really getting a AA.

Below is a small chart of Mikimoto’s pearl grading system and each grade’s meaning:

What else sets Mikimoto apart from all other pearls and pearl jewelry on the market?

Only the finest quality materials are used in the creation of Mikimoto jewelry including 18k gold or platinum, all natural colored gemstones, the finest silk thread for strands, and the Mikimoto trademark. The trademark can be found on the clasp, ring shank or earring back of each piece of jewelry. Mikimoto strands and cultured pearl bracelets are also fitted with a signature M-circle logo charm.

I’m convinced that Mikimoto’s pearls are the world’s best but where can I learn more?

Most of these features and benefits really need to be experienced first-hand. So please feel free to come into a Shreve & Co store to see one for yourself. All of the staff can discuss Mikimoto’s exceptional quality and value, but if you really want to hear more about the history, ask for Mae in our San Francisco location or Tony in our Palo Alto location. You can also schedule an appointment here.