When you look at a TUDOR Black Bay watch, you catch glimpses of the brand’s history, combined into a magnificent timepiece that creates a modern feel out of timeless design elements. Each new color scheme, update, and tweak is pulled from the history of the watchmaker to align in the greater story of Swiss timepiece manufacturing. Then there is the TUDOR Black Bay Ceramic.

You may recognize the snowflake hands, first introduced by TUDOR in 1968, and the case is indeed the slab-side shape you are familiar with, but the comparison quite literally ends there. In place of the traditional Black Bay is an ominous, sleek, stealthy beauty constructed from ceramic and powered by the most technologically advanced movement ever placed in a TUDOR. This is the Black Bay Ceramic. 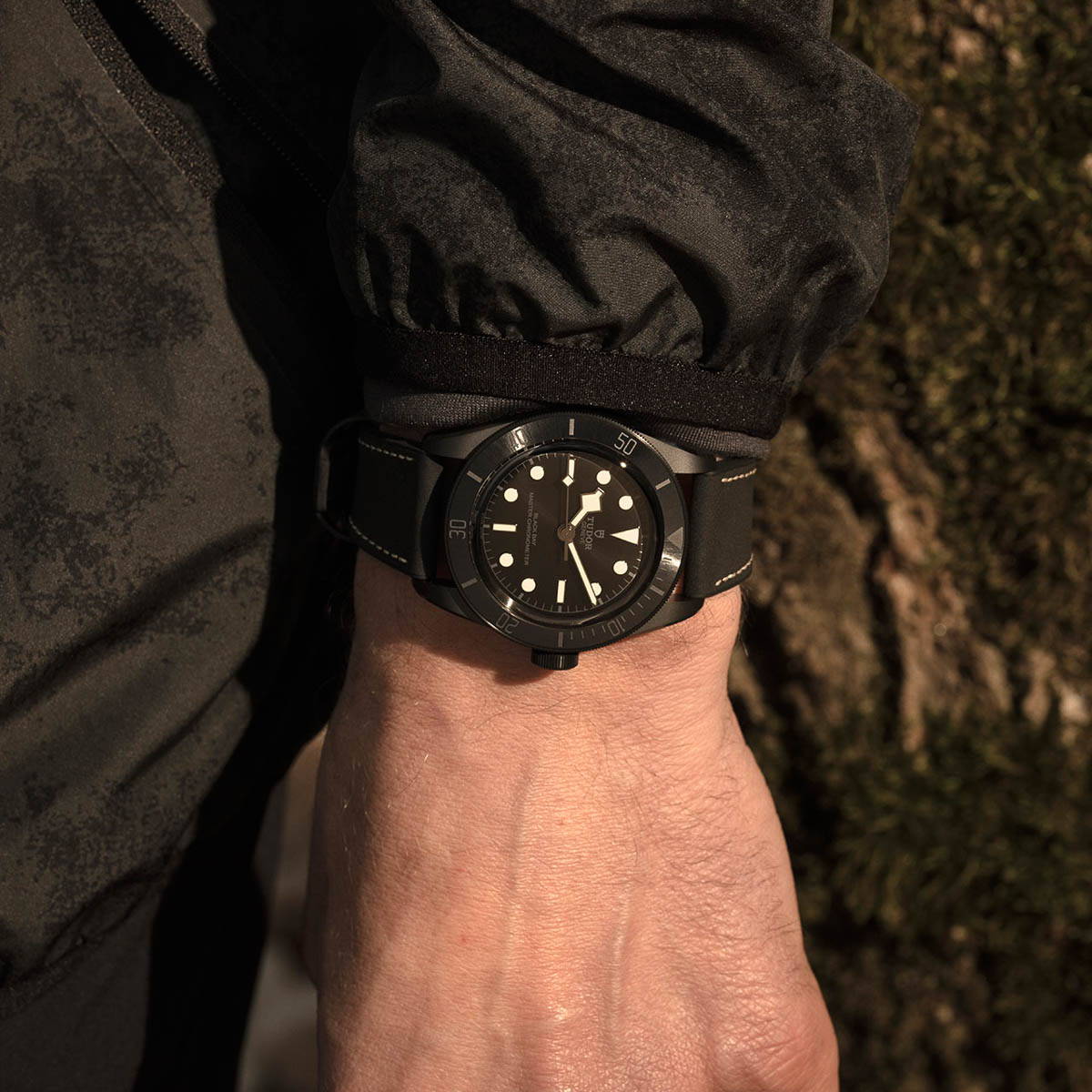 Those few subtle references to the history of the Black Bay lineage are complimented by the high-tech details of TUDOR’s newest tech masterpiece. The first thing you notice is the depth of the timepiece, the sheer darkness of the material and the strap, the way the hour markers almost seem to disappear into the dial of the watch. The case is the traditional 41mm size, constructed of matte black ceramic with a micro-blasted finish and an open case back of black PVD treated steel which reveals the all-black finish of the exquisite new movement (but more on that shortly). The traditional snowflake hands are present, treated with grade A Swiss Super-Luminova® so they can be seen in the darkness that surrounds them. The dial is also matte black, dotted with the applied hour markers featuring the same lume treatment. Replacing the traditional ‘Chronometer Officially Certified’ on the dial are the words Black Bay Master Chronometer. It is this subtle change the denotes arguably the most interesting feature of this new timepiece by TUDOR.

MT5602-1U. The designation of the all-new self-winding mechanical movement with bidirectional rotor system placed inside the Black Bay Ceramic. This movement is indeed COSC certified, with a silicon hairspring and a robust 70-hour power reserve. The calibre is also showcased in a stunning all-black finish including the tungsten oscillating mass of the winding rotor. This new movement is part of a package (case, movement, and strap) which together have become the first METAS certified watch produced by a brand not named Omega. This means the entire timepiece was subjected to magnetism testing and exhibited smooth, precise function when exposed to a magnetic field of 15,000 gauss. In addition to the normal COSC certification which denotes precision movement function at two different temperatures in six different positions at two different power level reserves, the result is a nearly flawless timepiece guaranteed to be precise for years to come.

Finishing off the stealth appearance of the Black Bay Ceramic is a hybrid leather and rubber strap with a black steel clasp and safety catch. A complimentary black fabric strap with cream band and black steel buckle is also included in the box. The Black Bay Ceramic doesn’t display as a “dive watch”, but rather as an absolute statement of modernity in a subtle shroud of vintage inspiration. As TUDOR says “resolutely anchored in the present, it brings together almost seven decades of TUDOR diving watches”, but they forgot to mention that it is absolutely brilliant, with looks to match.