The age old debate – white gold vs. platinum. You’ve probably weighed the pros and cons, right? White gold is typically cheaper but is not as durable while platinum is heavier and requires less maintenance. You might have heard that platinum is the “best” metal, but is it enough to justify a heftier price tag? Over time, the two metals have gone in and out of style, risen and fallen in price point, and been preferred by royals but no matter what way you look at it, platinum has always come out on top.

Today, platinum is best known as the preferred metal for engagement rings, wedding bands and fine jewelry but unlike gold, it’s only been used in the jewelry industry since the 19th century. It was originally used in 700 BC as a decoration for hieroglyphics, most famously on the casket of the great high priestess Shepenupet, the daughter of the King of Thebes. Platinum was then forgotten by mankind for over two thousand years, only to re-appear when European explorers discovered the new world.

In the 16th century, Spanish conquistadors rediscovered platinum by mistake and viewed it as a nuisance to their hunt for gold. While panning in New Granada, they found white metal rocks mixed in with yellow gold nuggets, making it difficult to extract their intended loot for trade. The Spanish called the metal “Platina”, a derogatory term derived from the Spanish word for silver, meaning “little silver”. Still thirsty for gold, and unimpressed by platinum’s appearance, the Spanish mistakenly dismissed it as an inferior metal and threw it back into the rivers of Ecuador to “ripen”. For years after its initial rediscovery, platinum had no value except as a means of counterfeiting. 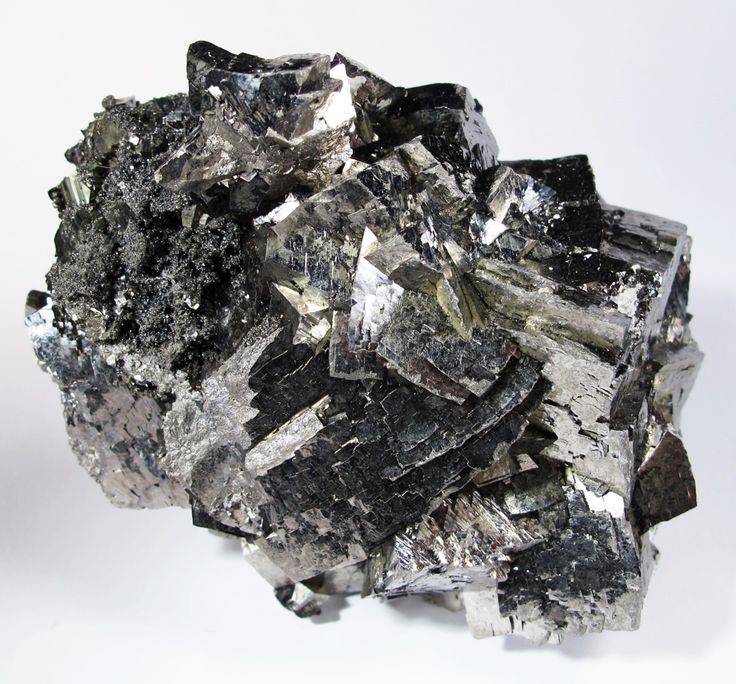 In the 18th century, the precious metal proved to be a tough medium for European scientists because of its high melting point and its resistance to corrosion. It wasn’t until 1751 that it was even recognized as an element and used for the decoration of porcelain and the making of laboratory tools. However, a Swedish researcher named Sheffer succeeded in melting platinum by adding arsenic to it which attracted leading metal workers like Marc Janety, Royal Goldsmith to Louis XVI, to use it for cutlery, watch chains and coat buttons.

Unfortunately, the use of platinum was limited by its supply. In 1820, Columbia was the only major producer of platinum in the world. But in 1822, the precious metal was discovered in the gold fields of the Ural Mountains. The Russian government decided to use platinum to make roubles and over the next 18 years, they minted almost 500,000 ounces, essentially introducing to the world the notion that platinum, like gold, was a source of value.

Towards the end of the 19th century, Louis Cartier became the first person to successfully create platinum jewelry using an oxyhydrogen torch. He used platinum in his pieces to enhance the brilliance of diamonds. Platinum-mania swept through Europe and Russia as kings, queens and czars adorned themselves with anything and everything silver in color. Cartier was hailed by King Edward VII of England as the “jeweler of kings and the king of jewelers.”

Because the production of platinum remained limited through the 1920’s, white gold was invented as a low cost substitute – an alloy of gold mixed with copper, zinc and a metal from the platinum family. Depending on the manufacturer, white gold could be produced with different alloys giving the metal different levels of ductility, malleability and hardness. Sources of platinum production remained limited until 1924 when German geologist Hans Merensky discovered the world’s largest platinum deposit near Johannesburg, South Africa. The discovery made the Bushveld Complex a primary source that still produces more than two thirds of the world’s annual platinum supply today. The other primary source of platinum exists in the Noril’sk-Talnakh region of Siberia.

Through the 1930s, platinum was the most popular metal of choice for creating fine jewelry. Unfortunately, the US government declared it a strategic metal in 1942. Strategic metals are typically those that have applications in the technology and industrial sectors and have sources that are susceptible to disruption. The US government needed to limit consumption of platinum to its most useful applications and in this case that was the industry of war. Though the war ended only three years later, advances in the use of white gold had surpassed the demand for platinum in that short period of time.

During the 1960s, the demand for platinum in jewelry experienced an exponential rise in Japan, appealing to the public because of its purity, color, prestige and value. Platinum jewelry later succeeded in penetrating other markets including Germany in the 1970s, Switzerland and Italy in the 1980s, and the United Kingdom, the USA and China in the 1990s.

Today, platinum is more sought after than ever before. For many consumers, platinum jewelry is a more sophisticated option when shopping for a white metal. Though gold often refers to first place, platinum is the new symbol of wealth and prestige.

Think of a “platinum credit card,” which often has better benefits and privileges than a “gold credit card.” Add Hollywood’s obsession with platinum on the red carpet, and you’ll see how platinum has become the new gold. For many people, purchasing platinum jewelry is both a fashion statement and a way to invest wealth.

So, what’s made platinum continue to rank at the top of the list of precious metals used in jewelry making? Platinum is far superior to its gold and silver cousins and here’s why:

Platinum is mined far less than its other precious metal counterparts because it is more difficult to source and extract. In fact, only 133 tons of platinum are mined each year, compared to 1,782 tons of gold.

Because white gold is crafted from a variety of alloys, some people have allergic reactions when wearing jewelry made from the metal. The allergy is most commonly caused by nickel which is used to create its white color. Platinum, on the other hand, is purer and hypoallergenic. In fact, for a piece or collection to be sold as “platinum jewelry”, it must contain at least 95% platinum or it’s referred to as an alloy. There are, however, companies that manufacture white gold that adheres to the European Nickel Release standards, which are among the most stringent in the world. Abiding by these standards, allows white gold to be hypoallergenic as well.

Platinum is an extremely durable metal, and is more ductile and dense than gold. Platinum jewelry is the perfect choice for a lifetime of everyday wear. It doesn’t reduce in quality over time and holds gemstones firmly and securely in place. In fact, some of the world’s greatest treasures are set in platinum, such as the Hope Diamond. Unlike white gold, the higher the percentage of platinum in the metal, the less malleable it is, preventing it from dents and dings.

In order to create the silvery color of white gold, yellow gold must be mixed with other white metals such as silver, nickel, manganese or palladium. Often, it must be recoated, or rhodium plated, to maintain its white, shiny finish, otherwise white gold will revert back to the color of its main ingredient – yellow gold. Platinum, on the other hand, has a natural grayish white color. Over time, platinum’s color will not fade to yellow like white gold.

Keep in mind that all jewelry needs to be professionally cleaned over time, as precious metals lose their luster through normal wear and tear. White gold, however, will need more care to help retain its original shape as years go by. Both white gold and platinum can be polished, but white gold will require the rhodium finish to be redone every few years.

The biggest advantage of white gold over platinum is the cost. Because platinum is more dense than gold, the same ring will weigh significantly more in platinum than in gold (and precious metals are priced by weight). Therefore, it’s easy to understand why a white gold setting costs less than a comparable setting in platinum. Gold and platinum pricing usually fluctuates from day to day; however, platinum has historically sold at higher prices. Platinum’s higher price also reflects the higher cost of working with the metal to create elegant settings and other pieces.

Does Shreve and Co. sell jewelry made from both white gold and platinum?

Shreve and Co. maintains relationships with jewelry brands from all over the world that feature pieces made from white, yellow and rose gold, sterling silver and platinum. Just like our first building in San Francisco, that survived the earthquake of 1906, we prefer to use only the best quality precious metals that last a lifetime. We would suggest purchasing pieces set in platinum because of its hardy nature. The cost of maintaining white gold eventually evens out the initial cost of platinum (rhodium plating, redipping, etc). 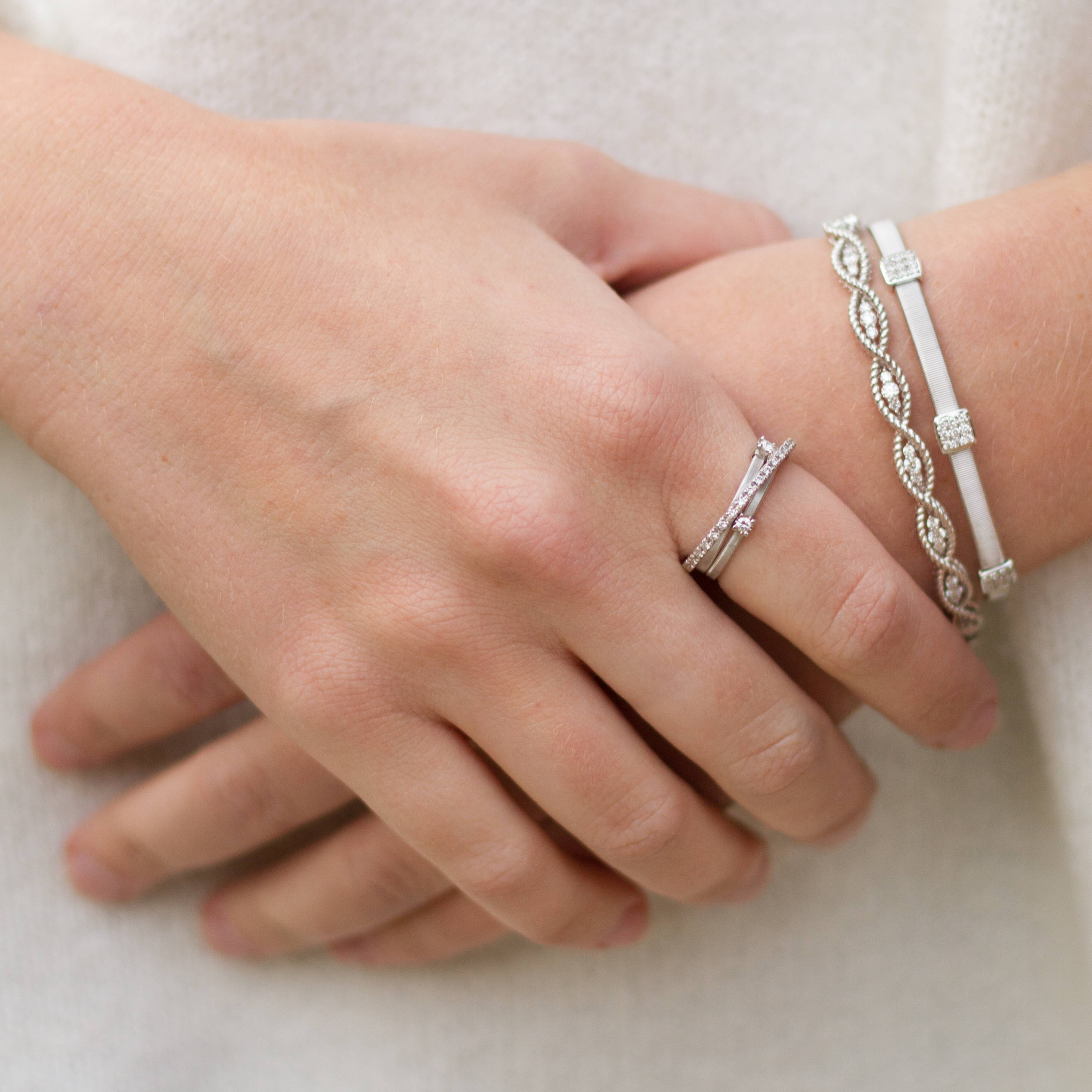 Have more questions about platinum vs. white gold?

Feel free to come into a Shreve & Co store and explore our collections of platinum jewelry for yourself. All of the staff can discuss the pros and cons and help you decide which metal is right for you, but if you really want to know more about the history of precious metals, ask for Maria in our San Francisco location or Tony in our Palo Alto location. You can also schedule an appointment here.