What makes the needs of astronauts, pilots, divers, and bomb disposal experts similar when looking for a timepiece? Seconds matter. Being sure of the time and clear about the information presented can be the difference between life and death for extreme professionals.

So, how did Bell & Ross, started by two college students as a university project, become a staple for military professionals and specialists around the world? By never losing focus of the simple idea that “function shapes form”. 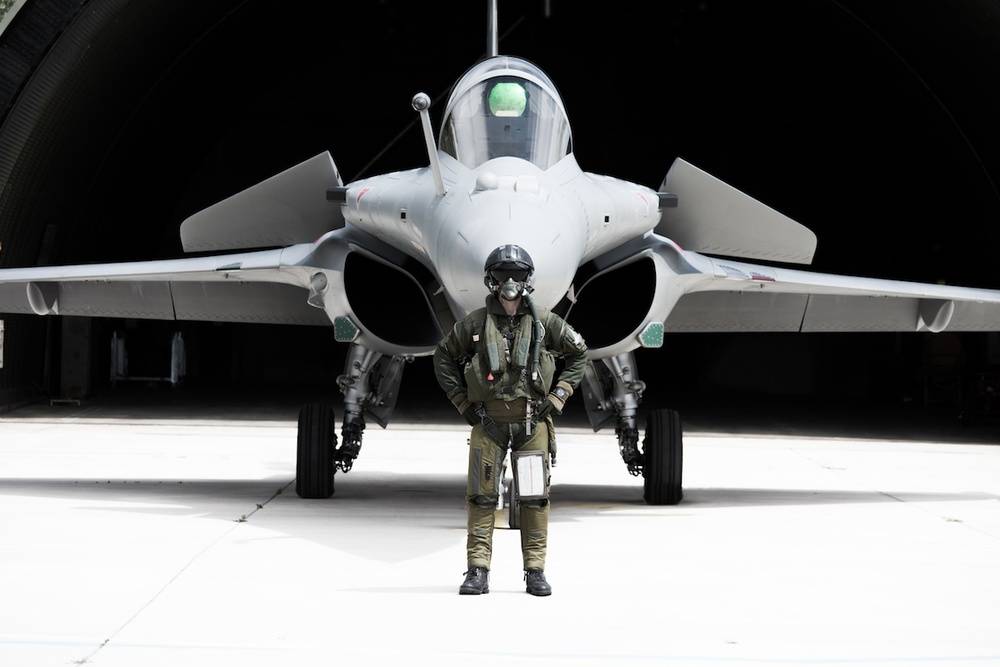 Bell & Ross has created a name synonymous with clear visual presentation, exceptional attention to mechanical detail, optimal water resistance, and precision craftsmanship. These four foundational factors of all B&R watches have garnered the brand a reputation with elite performers the world over, solidifying Bell & Ross as the preeminent name in timekeeping when the going gets tough.

Function and Form Meet in an Unlikely Place – Sinn Specialuhren

The Bell & Ross story begins with Bruno Belamich (Bell) and Carlos Rosillo (Ross). Boyhood friends, the two joined forces after attending university, teaming up with Sinn to produce their first timepieces. Sinn Specialuhren is a half century old German company known for their production of superior aircraft navigation instruments. 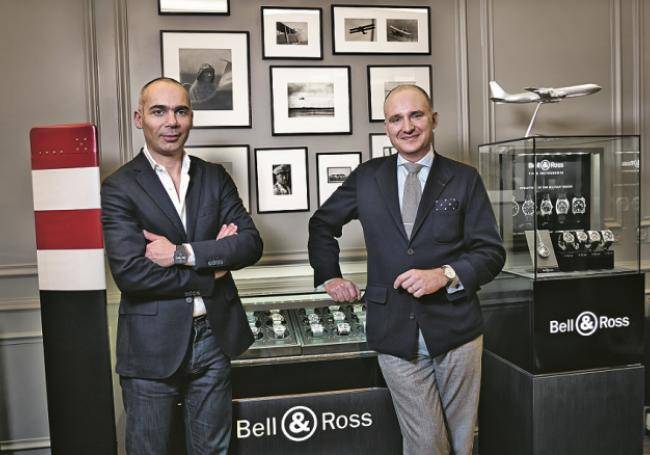 The specialty of Sinn, coupled with the ideology of Belamich and Rosillo, led to the partnership of French watchmaking group and German manufacturer in 1992. Bell & Ross was born with the singular aim “to create timepieces perfectly suited for professional use”.

After only six years in business, Bell & Ross caught the eye of Chanel Horlogerie, who purchased stake in the new company in 1998. By 2002, Chanel had purchased a larger stake, Belamich and Rosillo had retained majority holding, and Bell & Ross became an independent entity producing watches in La Chaux-de-Fonds, Switzerland.

To this day, Belamich and Rosillo remain close with their mentor, 99-year-old Helmut Sinn. In the early days, success required more than a great partnership. Within the first six years, Bell & Ross had produced three exceptional timepieces which clearly demonstrated their commitment to performance under the most demanding circumstances.

Shortly after their founding, Bell & Ross issued the Space 1, the first automatic chronometer worn in space. Adorning the wrist of German astronaut Reinhart Furrer on a 1983 Spacelab mission, the Space 1 was the epitome of function, operating in zero gravity outside of the Earth’s atmosphere. The 1994 edition demonstrated the commitment to utilitarianism, while provoking a sense of history which positioned the brand for their next leap forward.

In 1996, Bell & Ross produced the TYPE DEMINEUR (Bomb Disposal Type). Composed of an anti-magnetic, a-magnetic case, the watch found favor with the French Security Services. Requested for production due to its legibility, reliability, and precision matching the operational specifications of the French government, the bomb disposal type brought to life the mantra of “function shapes form”. 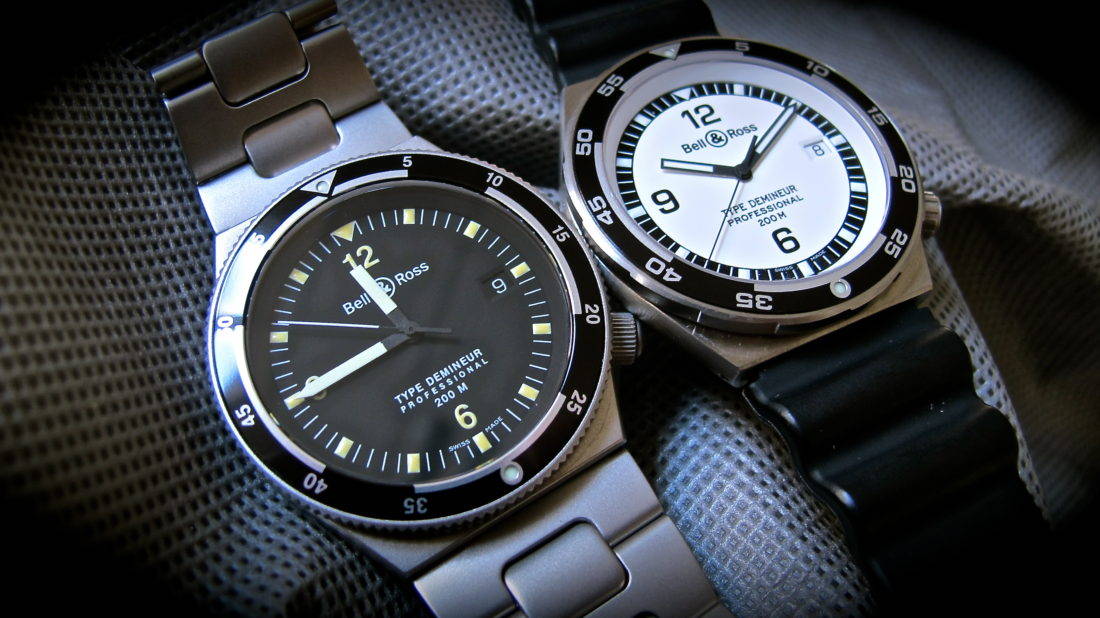 One short year later, Bell & Ross demonstrated once again their commitment to the extreme, with the production of the Hydro Challenger in 1997. World Water Resistance record holder according to the Guinness Book of Records, the timepiece withstood pressure to 11,100 meters thanks to the introduction of silicon into the watch, which increased water tightness while also producing unprecedented readability and complete reduction of the mirror effect under water.

While these three specialty watches established the brand, the introduction of the BR-01 in 2005 made Bell & Ross iconic in the watch world, with the introduction of a truly unique timepiece. With an aesthetic shaped on aeronautical instrumentation, the BR-01 brought to life the four tenets of Bell & Ross watchmaking (Legibility, Functionality, Reliability, and Precision) in a new form, moving the watch world forward and cementing the brand in the upper echelon of luxury timepiece manufacturers. The BR-01 now serves as the stalwart of the Instrument family of Bell & Ross watches, accompanied by the Vintage and Marine families, they comprise the three collections of the modern Bell & Ross brand.

Designed to rekindle the classic spirit of service watches and traditional pilot watches of the 1940s, the Vintage collection of Bell & Ross watches features natural leather straps, satin cases, and folding buckles, producing a more elegant look and timeless appeal while still maintaining the style inherent in all B&R timepieces. Anchored by the PW1 pocket watch, with classic styling and timeless appeal, the Vintage collection is truly reminiscent of the 1940s in form. Without undue frivolity or complication, if you are looking for a classic watch that will never go out of style, the Vintage collection from Bell & Ross will have exactly what you desire.

If, like many looking to purchase a luxury timepiece, you want a truly unique watch on your wrist, the Instrument collection from Bell & Ross is without comparison. Comprised of the company’s most popular square-cased pieces, the Instrument family features cases in 46mm, 42mm, and 39mm, with a range of colors and strap types. Modeled after the aeronautical instruments produced by founding partner Sinn, the Instrument collection is unlikely to be seen on the wrist of your co-workers. The BR-01 is a visual feat of modern watchmaking with a clearly intentional nod to the heritage of the brand, sure to make you stand out in a crowd. 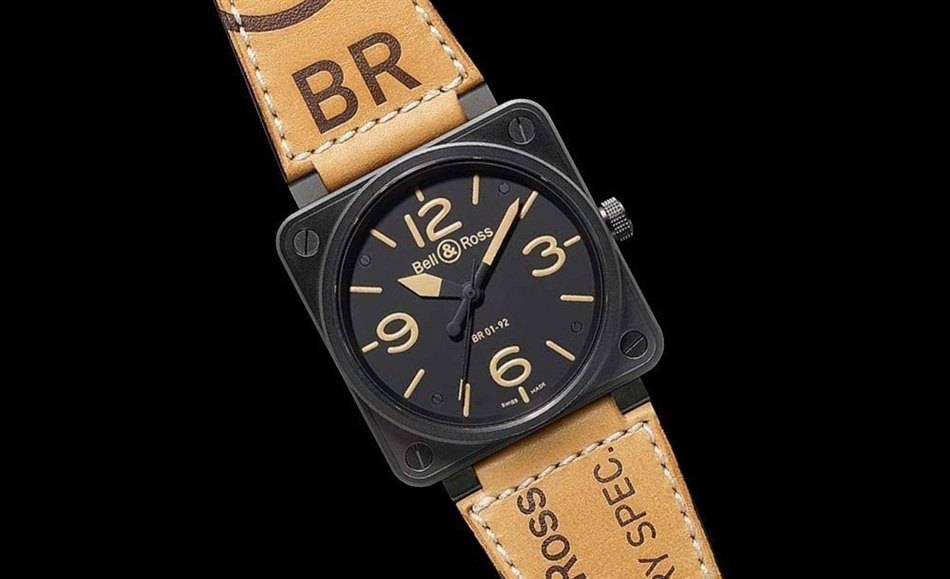 Sporting decompression valves, special coatings to make the face visible at extreme depths, and screw-in crowns, the Marine collection is a serious watch, for serious divers. With water resistance to 500m on the chronograph and 1000m on the automatic, the Marine collection is a workhorse timepiece. There are no special editions or extra features, there is only useful, well-planned, impeccably executed design on all six Bell & Ross dive watch variations.

While the timepieces of the three collections vary substantially, each watch comports to the founding premise of Bell & Ross by exhibiting a laser focus on four key tenets. Legibility, Functionality, Reliability, and Precision are the design principles by with the company has defined itself and by which each watch is constructed.

Legibility is at the forefront of B&R designs. Unique coatings which provide clarity underwater, large bold numerals reminiscent of vintage airplane instruments, and distinct hour markers with historic flair can be found across the collection. With a Bell & Ross timepiece, you will never be distracted by trivial attachments, every element is thoughtfully placed to provide a clear picture to the eye.

Constructed in Switzerland to exacting standards, the reliability and precision of Bell & Ross watches are demonstrated by the strict quality measures and clean lines apparent on all pieces. Assembled by expert craftsmen, these watches truly deserve the mark Swiss Made.

A timepiece can be purchased for many reasons. Sentimentality, luxury, or functionality. There are many brands to choose from, but for a unique watch that can take a beating and keep ticking, there is no choice but Bell & Ross. Quite simply they make watches that work. Functionality is at the forefront of every design.Backed by women and men in the most extreme of professions, Bell & Ross has earned their reputation as the undisputed king of functional luxury timepieces.