Recently, we’ve seen a more and more couples visit our stores in search of non-traditional engagement rings – from sapphires to emeralds to rubies and more. While this may seem like a recent trend – in jewelry, as in fashion – what goes around comes around.

In fact, non-diamond engagement rings actually carry hundreds of years of tradition, more specifically in the history of the British Royal family. We all know Prince William proposed to Kate Middleton with Princess Diana’s spectacular oval sapphire – but what about the rest of the British royal family?

From the Queen Mother to Sarah, Duchess of York, the royal family has a century-long habit of wearing non-traditional engagement rings. We’ve rounded up some of our favorite pieces worn by royal brides.

Prince Albert, the Duke of York, proposed to Lady Elizabeth Bowes-Lyon three times before she accepted his hand in marriage, as she was hesitant about taking on a royal lifestyle. When she finally agreed, Albert gave her a platinum sapphire engagement ring with diamond accents. Lady Elizabeth wore the sapphire ring along with a Welsh gold wedding band when she married the Duke and became Duchess of York in April 1923.

In 1936, she became Queen Elizabeth when her husband’s brother chose to abdicate the throne in order to marry American divorcée Wallis Simpson. When her husband died in 1952, she was known as Queen Mother or Queen Mum, to avoid confusion with her elder daughter, then Queen Elizabeth II. In the 1950’s, the Queen Mum switched from wearing her original sapphire ring to sporting a large pearl ring surrounded by diamonds.

King Edward VIII abdicated his throne in order to marry Wallis Simpson, an American socialite who had had two previous marriages end in divorce. When Edward gave up the throne, his brother, then King George VI, created him Duke of Windsor. Thus, Wallis Simpson became Duchess of Windsor when they were married.

Her engagement ring was a 19.77-carat emerald, inscribed with the words: “We are ours now 27 x 36.” The numbers in the inscription represent the date Edward proposed to Wallis – October 27, 1936.

Princess Margaret, daughter of King George VI and Queen Elizabeth, was first engaged to Peter Townsend in 1953. However, Townsend’s divorce from his first wife led the Church of England to refuse to marry the couple, and the engagement fell apart. Margaret later accepted the proposal of photographer Antony Armstrong-Jones, and the pair married in 1960.

Armstrong-Jones designed an engagement ring for Margaret that featured a ruby surrounded by diamonds, created to look like a rosebud in honor of Margaret’s middle name, Rose. Following their marriage, Queen Elizabeth II gave him the honor Earl of Snowdon.

In February 1981, Lady Diana Spencer became engaged to Charles, Prince of Wales, eldest son of Queen Elizabeth II. Charles presented her with a selection of rings and asked her to choose her favorite. Diana chose a 12-carat oval Ceylan sapphire stone surrounded by 14 solitaire diamonds set in 18-carat white gold.

The ring was said to be similar to her own mother’s engagement ring. Diana and Charles were married in July 1981, at which point she became Princess of Wales. The couple divorced in 1996, but Diana continued to occasionally wear the sapphire ring she loved until the day she died.

The couple was married in July 1986, at which point The Queen bestowed the title Duke of York upon Prince Andrew, making Sarah Her Royal Highness The Duchess of York. The pair divorced in May 1996.

Catherine “Kate” Middleton met future husband Prince William, Duke of Cambridge, son of Charles, Prince of Wales, back in 2001, when they were both students at St Andrews. The couple began dating in 2003, and though they split for a short period in 2007, they eventually became engaged in October 2010 while on a trip to Kenya. Prince William proposed to Kate with his late mother Diana’s sapphire engagement ring.

Some reports say he had been carrying the ring around with him in his backpack for three weeks before finally popping the question. The couple married on April 29, 2011, at which point they became Duke and Duchess of Cambridge.

Recently, we’ve seen the trend of non-traditional engagement rings certainly extend beyond the royal family – including to Hollywood royalty. Runway model Irina Shayk, who welcomed baby daughter Lea with fiancé Bradley Cooper just a few weeks ago, sports an emerald engagement ring with a diamond halo, set in yellow gold. When the pair got engaged in December 2016, fashion magazines were quick to note the similarities in style between Shayk’s sparkler and Kate Middleton’s.

With so many non-traditional options, we think an alternative to the traditional diamond is a lovely choice for an engagement ring. If you’re interested in crafting your own royally inspired masterpiece, join us this Friday, May 19th for our Colored Stone Trunk Show in Palo Alto. We’ll have an extraordinary number of options to choose from as well as experts on hand to help you make your vision come to life.

In fact, here is a sample of a custom engagement ring we made last year: 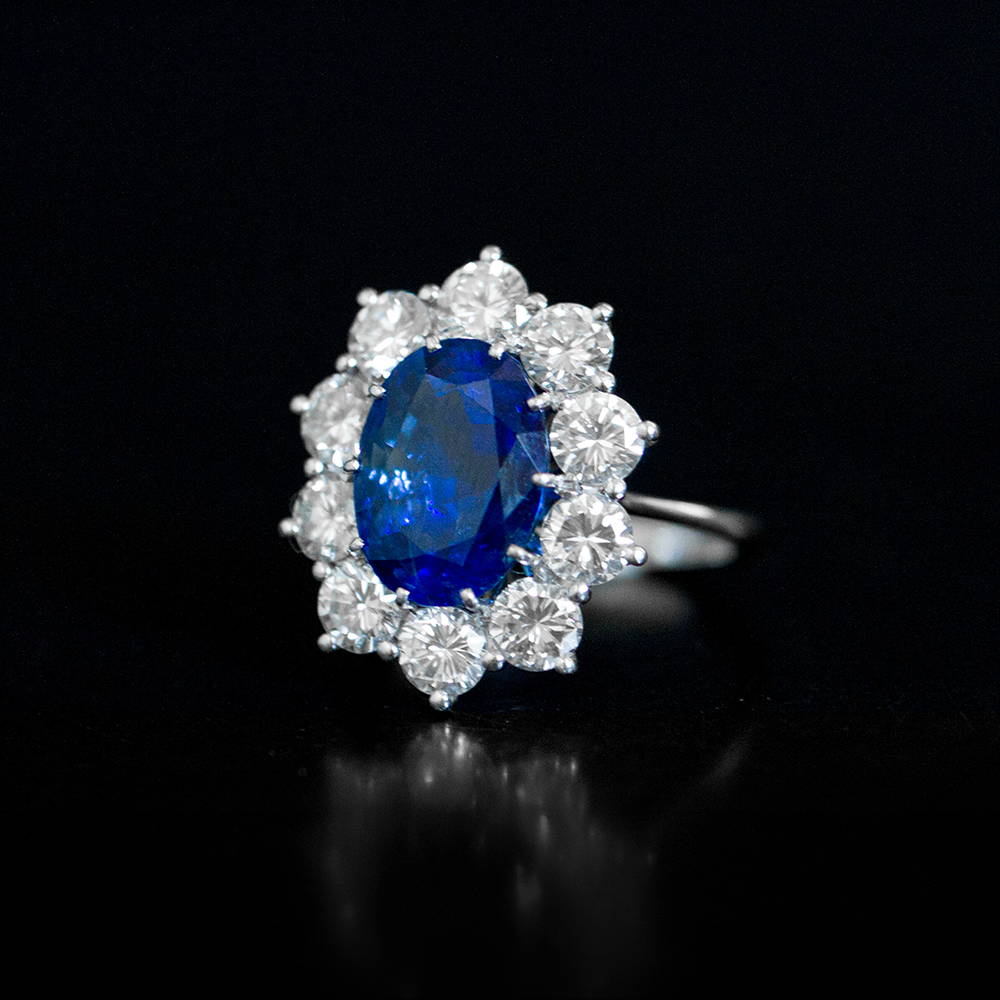