Dedicated to the rule formulated by Walter Lange – “There’s something one should expect not only of a watch but also of oneself: to never stand still”, the watch company which bears his name has become globally renown for excellence in timepieces. Among the multitude of precise complications and clean lines, five watches stand out in the lineage of A. Lange & Söhne.

Today we will look at five historic timepieces by the Saxon brand which has impacted global watchmaking for generations. 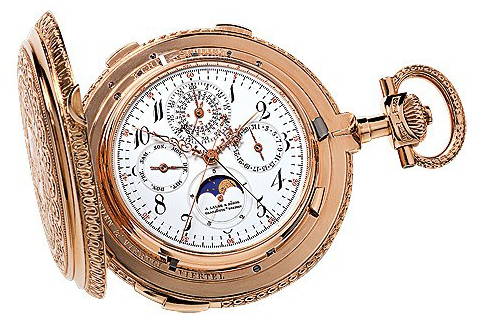 In 1902, Heinrich Schäfer, from Vienna, paid 5,600 German Marks for the second-most complicated timepiece ever made under the A. Lange & Söhne name. The price at the time could have purchased a large house in the area so the piece had to be something unique to command such a price tag. In the strictest definition the watch is a grand complication. It contains a perpetual calendar, split seconds chronograph, and minute repeater but the 42500 is so much more than a grandly complicated timepiece. In recent years, it has become the life-work for watchmaker Jan Silva.

As a timepiece, the 42500 Grande Complication was almost lost to history. In 2001, a married couple brought the watch to A. Lange & Söhne’s headquarters in Glashütte and asked if it was worth repairing. They had received the pocket watch from a housekeeper who received it as a gift some fifty years prior. The case and dial of the watch appeared to be in good condition, and A. Lange & Söhne watchmaker Jan Silva immediately recognized the piece as something special. The rose gold case was designed in the Louis XV style and bore an engraving of the goddess Minerva.

Internally, the timepiece was a disaster. Silva recognized the movement as the 42500, a timepiece which had not been accounted for in some time and was the only timepiece of its kind in existence. Only the larger components of the movement were still identifiable, and Silva faced a monumental conundrum. Where there was normally an intertwined network of bridges, springs, and wheels, there was only an amorphous mass. Did he leave the pocket watch as-is to document the historical significance of the timepiece, or did he attempt to recreate the complex glory of the 42500?

Over the next five years, Silva and a team of four watchmakers dismantled and re-constructed the 42500, restoring it to the glory of the historic timepiece. Featuring 833 components housed in rose-gold, the Grande Complication contains a seven-part enamel dial. The Grande Complication has both petite and grande sonneries. The gong block is imprinted with the initials “JAP” for Jules Audemars and Edward Piguet, founders of Audemars Piguet. Audemars Piguet may have constructed more than just the gongs, as it was not uncommon for Swiss companies to produce entire raw movements at the time which were then finished to a particular watchmaker’s specifications in-house.

After manufacturing several components with little to no guidelines, the complete restoration was revealed at SIHH 2010 in Geneva for public display. The 42500 Grande Complication currently resides at the Mathematics and Physics Salon in Dresden, a museum dedicated to historical timepieces and scientific instruments. 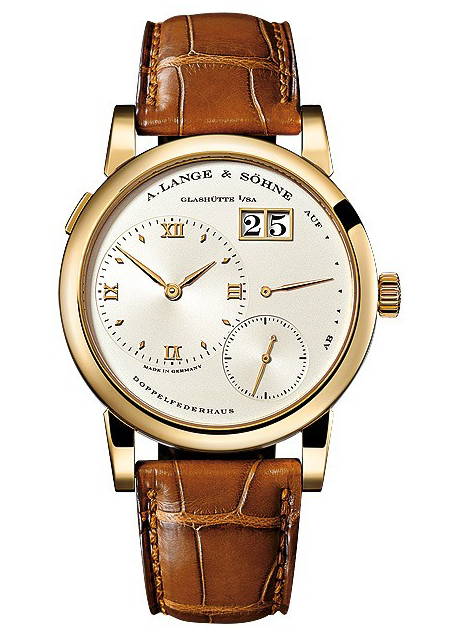 After German reunification in 1990, A. Lange & Söhne was refounded in Glashütte. One of the first releases from the "new" brand by the same name was the Lange 1. Launched in 1994, this timepiece became A. Lange & Söhne’s signature design and remains virtually unchanged in appearance today. The distinctive asymmetrical dial appearance with large date display window and power indicator is the signature styling of the Lange 1. Originally containing the Caliber L901.0, which included a three-day power reserve, nine screwed gold chatons, an elegant swan’s neck fine adjustment mechanism, the caliber was updated in 2018 and replaced with a modern hand-wound movement.

A special challenge for engineers of the Lange 1 was to ensure the calendar function switched correctly at the end of months with 31 days. The large date display is the reflection of two patented wheels. The first bears the digits zero through nine and the second “tens” wheel has the numbers one through three with an additional blank field. For months with 31 days, the switch to the first day of the next month is where the complexity arises. The first ring must remain motionless overnight with the number “1” displaying and the tens ring must rotate ninety degrees to display a blank field. For months without 31 days a button on the case side is used to correct the date display at the end of the month.

If you like the Lange 1, take a look at a few other pieces from the collection including the Daymatic, the Time Zone, and the Moon Phase.

Unveiled at Basel Fair 1999, the in-house chronograph Caliber L951.1 by A. Lange & Söhne was hand-wound and had been under development for nearly four years. At 30.6 mm in diameter and 7.5 mm in thickness, the movement included a flyback function. Packed with unconvential features, the Lange Datograph did contain some classic elements, such as a balance which oscillated at a frequency of 18,000 vph. Some of the more uncommon elements included a separate bridge for the fourth wheel, a chronograph operating lever mounted between two bearings, and an adjustable coupling lever positioned in the center of the fourth wheel. 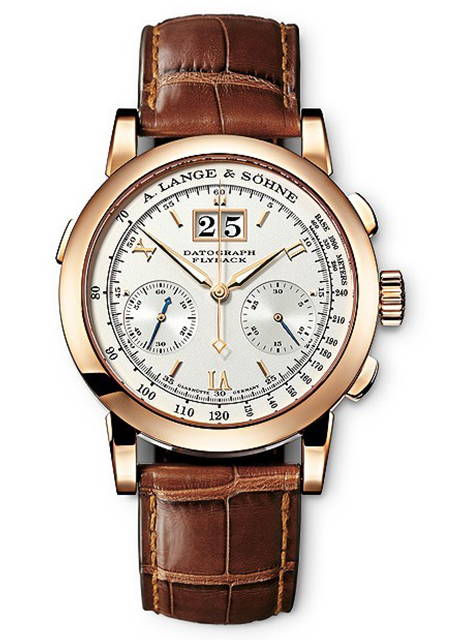 A minute-counter-operating lever mounted between jewels, a stepped pinion for accurate minute counter advances, an escape wheel with four jewels, and a large Glucydur screw balance were additionally each unique in their construction. The caliber supported A. Lange & Söhne’s familiar outsize date, to which the prefix “Dato” alludes. The current iteration is available as the Datograph Auf/Ab which features an improved movement and power-reserve display at six o’clock. The modern version has improved the reserve as well, from 36 to 60 hours. Modern models of the Datograph also include a perpetual calendar version of the timepiece.

If you like the original Datograph, check out A. Lange & Söhne's latest version - the Datagraph Up Down - here.

Building on the history of the Lange 1 and the use of disks to display the date, the Zeitwerk was launched in 2009. Taking the signature big-numeral concept and applying it to the marking of time instead of the date, the Zeitwerk is marked by two displays on the left and right of the dial which mark the hours and minutes. Described by then-CEO Fabian Krone as A. Lange & Söhne’s most important new watch since the Lange 1, the Zeitwerk accomplished a difficult task. The timepiece was able to provide enough power to move the three disks which mark the time, two disks for the minute display and one for the hour display, and to operate with the precision required of a timepiece manufacturer of A. Lange & Söhne’s heritage. 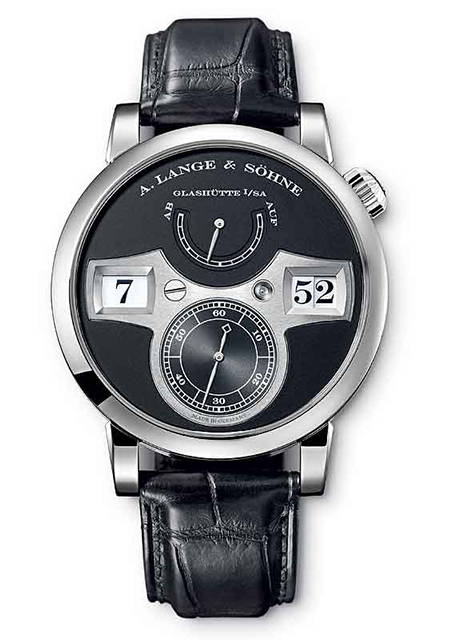 To maintain the same instantaneous movement at the end of each hour some intricate mechanisms were required, including a constant-force escapement with remontoir spring similar to the one used in the Lange 31. The movement is a hand-wound Caliber L043.1 comprised of 415 components ad measuring 33.6mm in diameter. A fly vane in the shape of a revolving door provides air resistance to ensure the disk’s jumps are not too forceful. The balance operates at the classic frequency of 18,000 vph.

Moon-phase displays are one of the most oft-repeated complications in watchmaking, namely because they are able to be executed with a high level of precision without extreme inherent difficulty. The orbit of the moon has been well mapped for millennia and for nearly as long as watches have been produced, watchmakers have turned to the stars for complications. The Richard Lange Perpetual Calendar Terreluna was introduced by A. Lange & Söhne in 2014 and is both a perpetual calendar and moon-phase timepiece. However, the display of the moon-phase complication on this watch is unlike any other. Residing on the back of the watch, the moon-phase display occupies a center disk bearing a celestial map and smaller disk with a globe displaying the northern hemisphere. 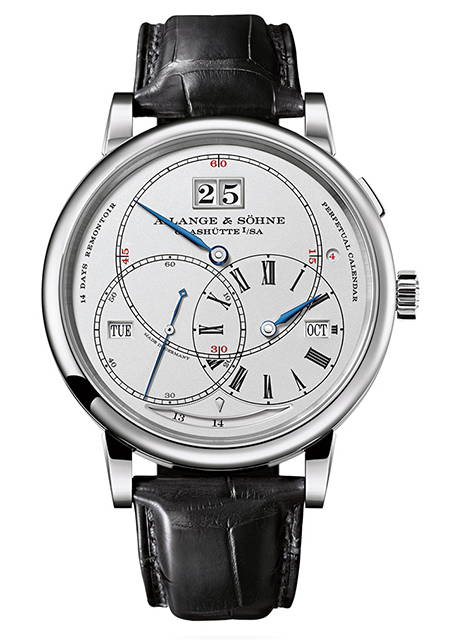 The celestial map disk is decorated with 2,116 stars in an arrangement which A. Lange & Söhne calls a “fantasy sky”, meaning the location of the stars is not representative of actual star locations. A third disk in the moon-phase complication lies beneath an aperture in the star disk. As the moon orbits it waxes and wanes and is visible in it’s display through the aperture. The earth disk rotates counterclockwise every twenty-four hours, allowing you to approximate the time anywhere in the northern hemisphere by referring to the 24-hour markers on the ring surrounding the display. Noticeably absent from the display is the sun. The unique nature of this complication is further enhanced by the watch’s balance wheel, which represents the sun in the complication.

Using the stationary position of the sun and the three wheels of the complication, the position of the moon can be measured so accurately that it will require only one day of correction in 1,058 years. The front of the watch displays regulator-style dials with minutes in the large circle and hours and seconds in the two smaller circles. The Terreluna has a power reserve of 14 days. Like the Zeitwerk, the Terreluna is equipped with a constant-force escapement.

Interested in Seeing A. Lange & Söhne's Legacy in Person?

Visit our San Francisco location and see A. Lange & Söhne's horological excellence for yourself.