When you stand over an array of diamonds, it can become a blur of beauty. They’re diamonds, after all! What’s not to like? Then comes the question: Do you prefer a Princess Cut or Cushion Cut?

Now you have a decision within a decision…and how can you know if one is better than another? The good news is: Don’t get yourself too worked up, because ultimately the “right” decision comes down to personal preference. It’s a question you literally can’t answer wrong.

But, let’s help you understand the difference between the two so you can pick the one that is right for you. 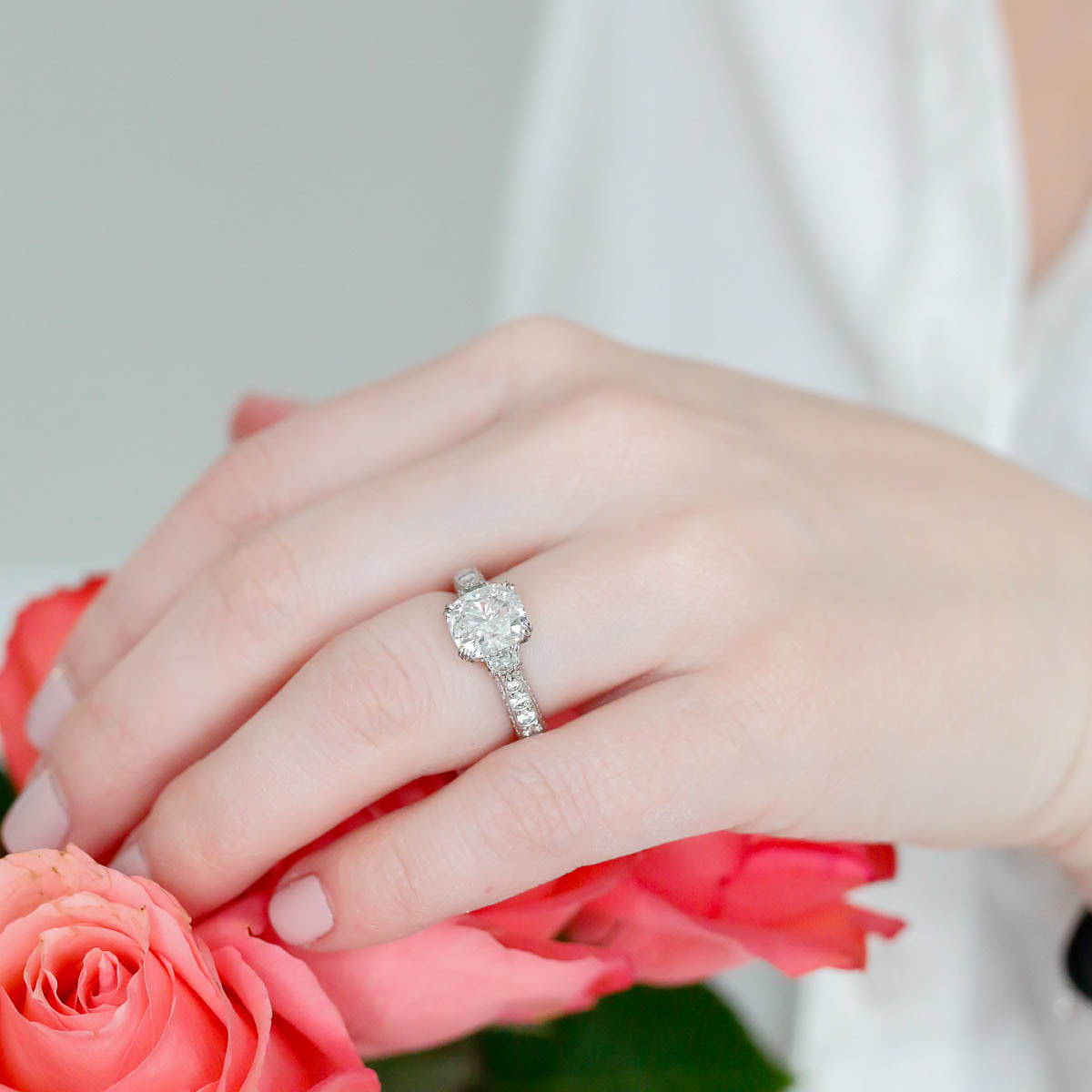 A Princess Cut diamond is easy to spot by its pyramidal shape and four beveled sides. Of all the square-cut gemstones, this cut is the one with the most brilliance thanks to the 57 or 76 facets. The more facets, the higher the brilliance. This cut was first invented by Betazel Ambar and Israel Itzkowitz in 1980 and was called the “Profile Cut,” taking inspiration from the French Cut and Quadrillion Cut.

The Princess Cut is a guaranteed eye-catcher thanks to the facet patterns. The crown, or upper part of the diamond, is cut in one of two ways:

A bezel cut, which is a facet cut from the table (the very top, flat part you see) over to the girdle (the outermost part as you look down on a diamond). The diamond cutter will choose between two, three, or four chevron patterns…each of which create a unique effect. With two you’ll get a large sparkle. Three is a nice balance between brilliance and dispersion (the “fire” or “rainbow” effect coming off the diamond). With four chevron patterns, you get a magical “crushed ice” effect.

A French Corner cut, which is when the facets cut on the table point toward the corners of the diamond.

When looking at ratios, the optimum number is typically between 1.00 and 1.05

The Princess Cut is the second most popular cut and examples can be seen here:

The Cushion Cut dates back to the 1700s and was the most popular shape for a diamond for many years. Vincent Peruzzi, a Venetian polisher originally invented it when he increased the number of facets 17 to 33. In the 1920s, Marcel Tolkowski reworked the cutting method in a way that would expand the table and reduce the height of the crown.

The modern Cushion Cut now has 58 facets which give it the unique fire and brilliance it’s known for. The pavilion will have two different pattern types:

Classic Cut – This will have anywhere from four to eight facets that create a “hearts and arrows” pattern, similar toa round brilliant cut.

Modified Cushion – A cut that has an extra row of facets, giving a “crushed ice” effect.

With a Cushion Cut, the ratios can be a shorter square or resemble a rectangle (also called an elongated cushion). For a square, the ideal ratio is between 1.00-1.03, with 1.05 still being acceptable. Rectangular ratios fall between 1.15 to 1.20, but can go up to 1.30 and still be acceptable.

From modern and glamorous to soft and romantic, the choice is ultimately yours! Both are highly sought cuts and deliver beauty in their own ways. For help deciding, stop in to any of our stores in San Francisco, California or Palo Alto, California today!