August produces the hottest day of the year for half of the country, so it is only fitting that the birthstone for August is formed under extreme conditions. Peridot has been found in hardened lava flows and meteorites which arrived from outer space. The month of August claims a few different birthstones, including Spinel and Sardonyx, but it is Peridot which is the most popular. Peridot is a yellowish green gem which can often be confused with other gems including topaz and emeralds. It is the sparkling green hue which appears to shine even brighter in the dark that has earned Peridot the nickname “evening emerald”.

Today, peridot is found around the globe, with deposits of the gemstone found in China, Myanmar, Pakistan, Tanzania, Vietnam, and the United States. Peridot Beach, in Hawaii, is known for the shimmering green glow on white sand caused by ancient lava flows which deposited the gemstone sand after volcanic eruptions. Arizona is the predominant modern source of Peridot in the United States, with deposits found in the desert of the San Carlos Apache Indian Reservation. Apache families have worked the mine for decades, currently eighty to ninety-five percent of the world’s peridot supply is mined here. Historically, peridot has been found in Myanmar, in the mountainous region near the gem city of Mogok. It is reported that loose peridot crystals have been found in mountain crevices in this region, with stones from Myanmar prized for their rich color and wonderful transparency. Perhaps the oldest recorded source of peridot can be found on the Egyptian island of Zabargad between 340-279 BC. While the stones produced there were said to be beautiful, the brutal island conditions earned it the nickname “Island of Death”. Specimens from this island can still be found in museums all around the globe. 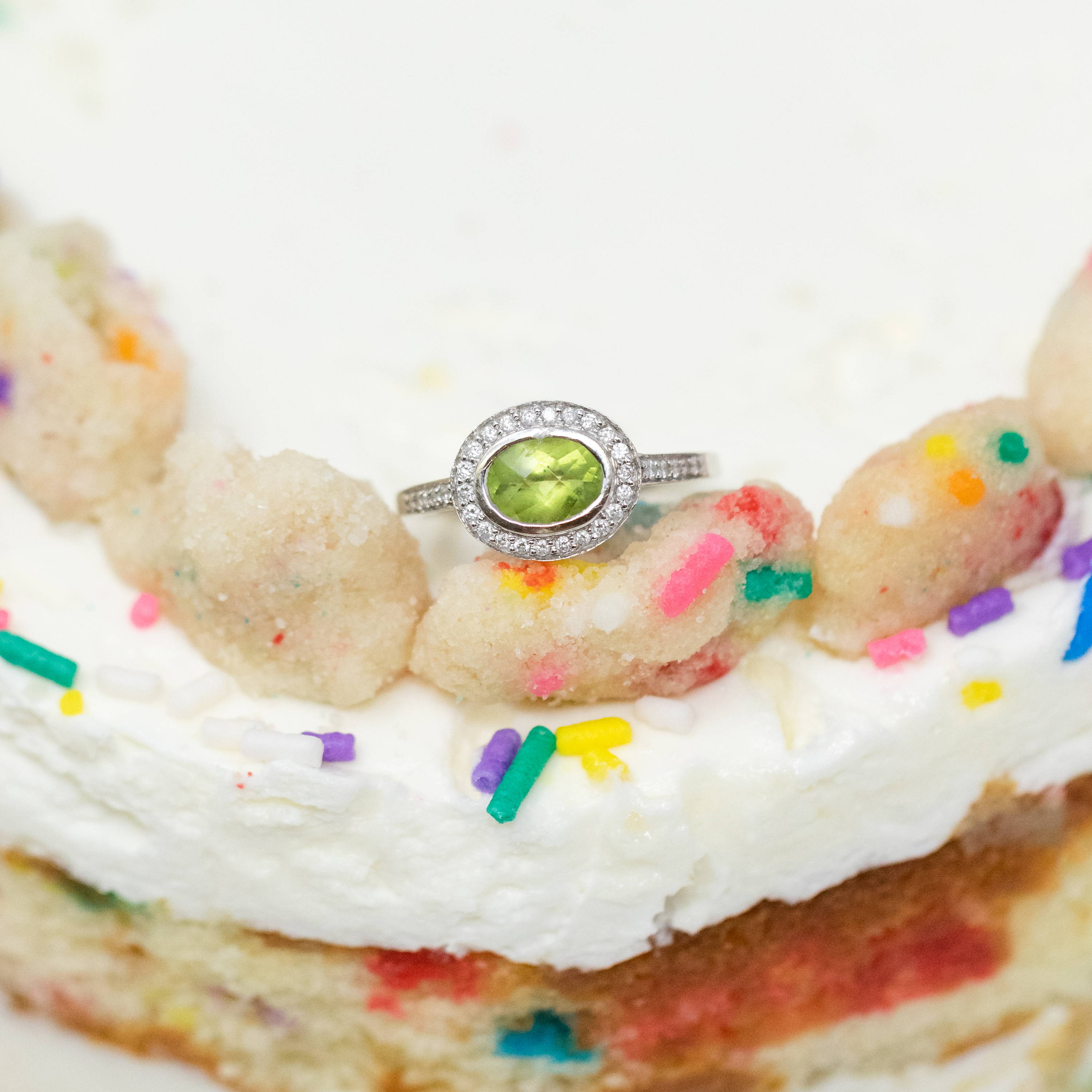 Peridot was valued by many ancient and medieval cultures. It was used for centuries as a protective talisman, shielding the wearer from evil spirits. It appeared in priest’s jewelry as early as the second century BC and was later found in churches throughout medieval Europe. Several historians even believe that the famed emerald collection of Cleopatra may have instead been comprised of peridot stones. The gemstone has long been believed to bring prosperity and good fortune. It has been said that the name peridot comes from the Greek word peridona, which means “giving plenty”. Even this though is somewhat of a mystery as many historians also believe the name peridot comes from the Arabic faridat, which means gem. While peridot is also given to celebrate a 16th wedding anniversary, it is most widely known as the birthstone for August.

Peridot gemstones are found in many beautiful pieces of jewelry, but they do come with some unique considerations due to the composition of the stone. Peridot rates as a 6.5 to 7 on the Mohs Scale, making it considerably softer than many popular jewelry gemstones. Sapphire, for example, is a nine on the scale. This softness means that peridot cannot stand up to hard wear, so it is not recommended for use in a daily wear piece of jewelry. Peridot can also be damaged by acids or by long term exposure to acid perspiration, so keeping the stone clean is very important. The softness of the stone prevents the use of ultrasonic cleaners as peridot is vulnerable to thermal shock, so the best way to clean this August birthstone is with a soft bristle brush and mild soap with warm water. The final consideration for peridot jewelry is storage, as the stone should be stored separately from harder gems to prevent scratches. 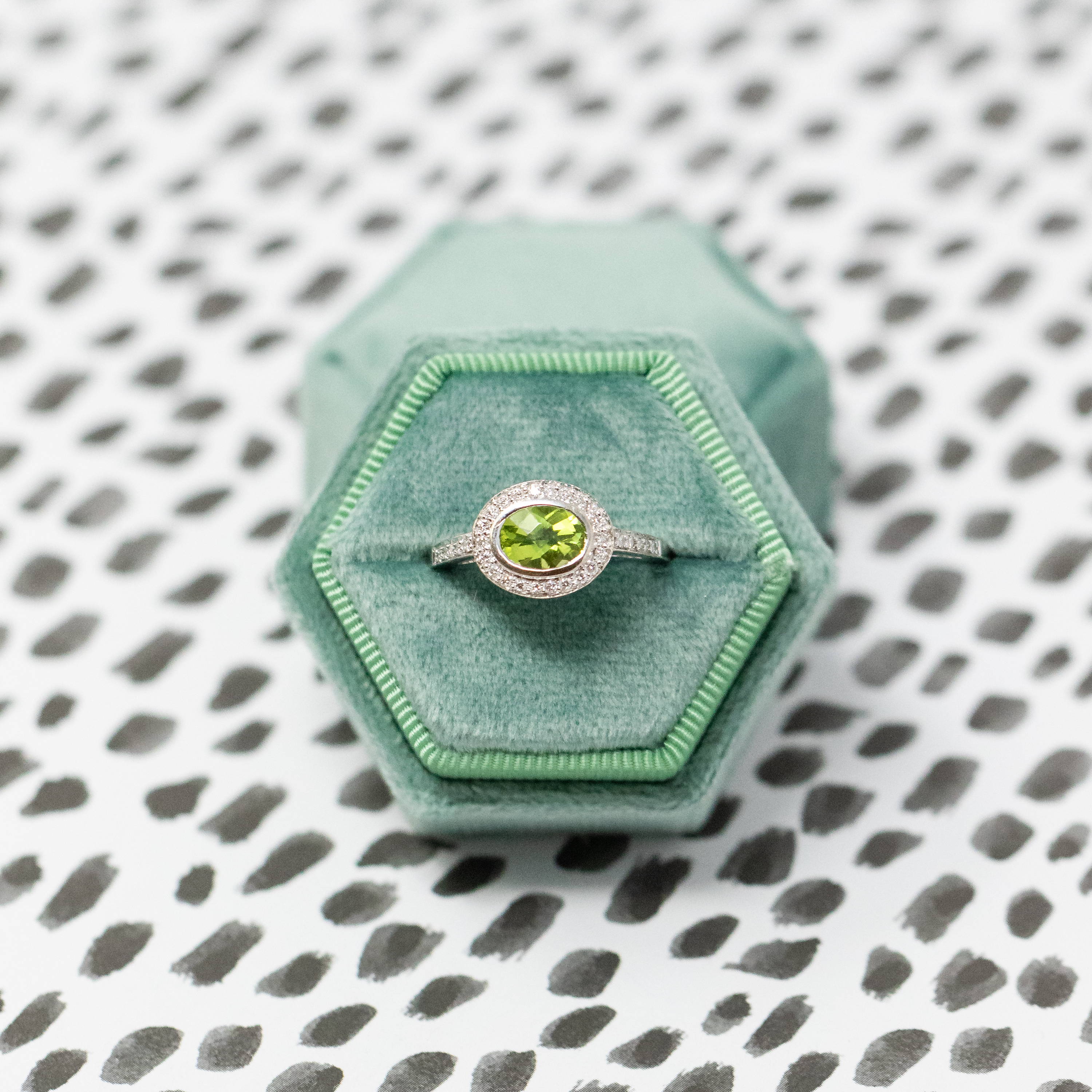 While there are some considerations when wearing peridot jewelry, this green “gem of the sun” has long been used in beautiful jewelry pieces. Those lucky enough to be born in the hottest month of the year get to call peridot their birthstone and enjoy the beautiful shades of this precious gem.