TUDOR has long been known for their excellence in professional diver’s watches, however, this year the brand is celebrating 50 years of chronograph brilliance with the relaunch of the Black Bay Chronograph. With two dial options, black with white sub-dials and white with black sub-dials, you might be tempted to think this “relaunch” is just the introduction of two new colors to the Black Bay Chronograph line. You would be mistaken, however, as TUDOR has reworked the timepiece first introduced in 2017 to bring some modern updates with a touch of historic nostalgia to the new edition of the chronograph.

The initial release of the Black Bay Chronograph by TUDOR was a resounding success, but if there was one complaint, it was that the case seemed to be too bulky for the luxury model. The new Chronograph remedies this with a 41mm diameter case which has been slimmed down in height from 14.9mm to 14.5mm. A slimmer appearance while still providing the same powerplant courtesy of the in-house MT5813 movement co-designed with Breitling kicks is a wonderful little marvel of engineering prowess by the team at TUDOR. The 70-hour power reserve and silicon balance spring of the MT5813, along with the COSC certification, were exceptional features of the original Chronograph, so keeping the same movement and fitting it into a smaller footprint was an absolute victory for this new model. 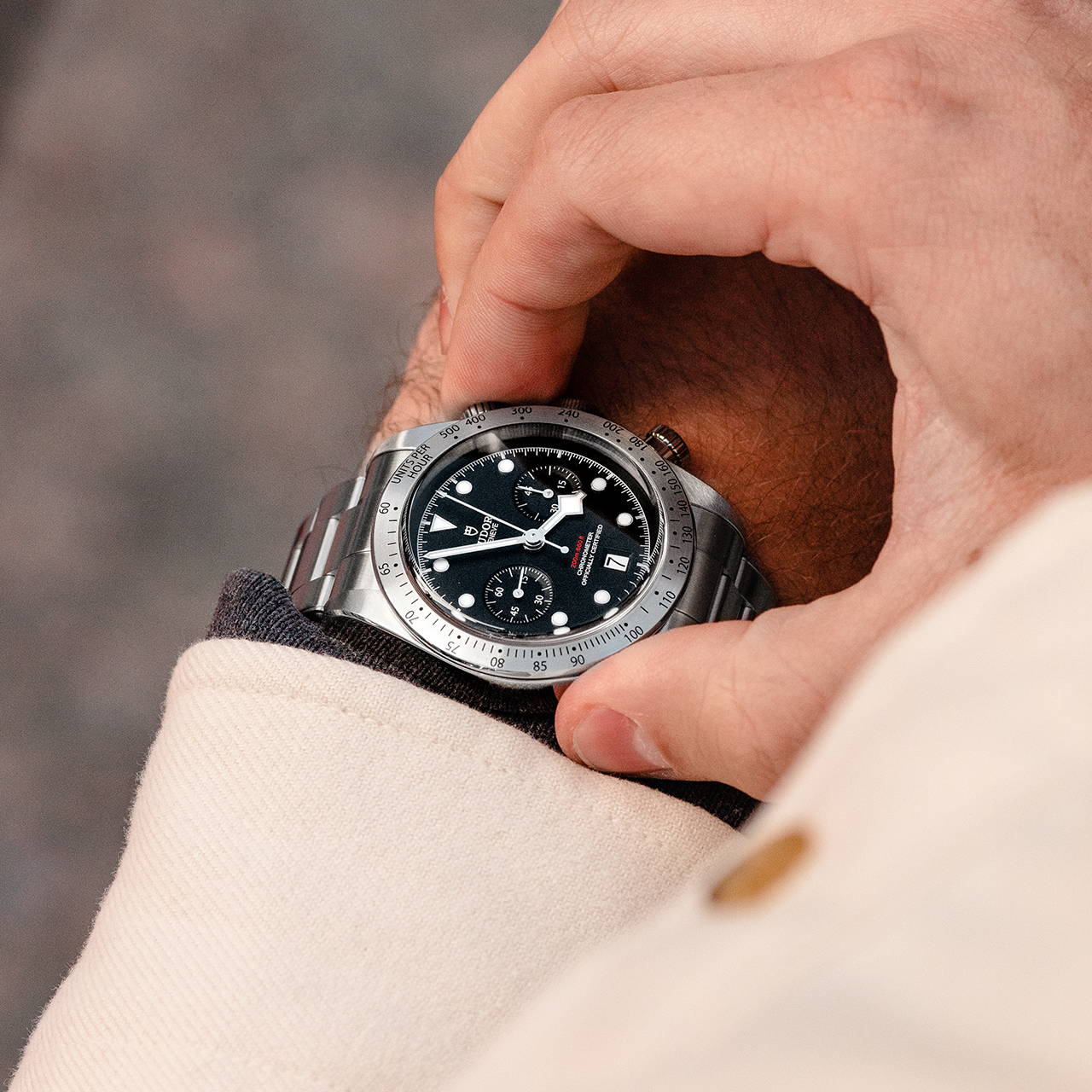 Chronographs typically exude a nostalgic note towards motor racing and “timed” events for obvious reasons. TUDOR has cultivated rich ties to the aquatic world of divers’ watches since the first release of a dive timepiece in 1954. The new Black Bay Chronograph blends the two worlds of dive and motor sport with a few interesting touches which make a resounding statement of historic appeal with modern aesthetic. First, the red tip on the chronograph arm is accompanied by a single line of red text on the dial which denotes the water resistance to 200m. It is clearly no coincidence that the arm used to measure speed has been paired with the depth to which this watch is certified. Next, the bezel features a classic chronograph appeal with a matte black anodized aluminum disc with silver markings for the tachymetric scale. This motor sports nod is offset by the round dive-style applied hour markers on the dial, complete with lume treatment to provide enhanced legibility in the dark (or underwater).

The confluence of motor sports and dive continues with steel screw-down pushers located at 2 o’clock and 4 o’clock to operate the chronograph. Finally, the new Black Bay Chronograph is available with three bracelets, the first a classic steel bracelet with folding clasp and safety catch. The timepiece is also available in a black leather strap, with removable bund, featuring a folding clasp and safety catch and reminiscent of mid-century motorsports vibes. The Third offering is perhaps the simplest, a black fabric strap with buckle which provides a unique dive watch style look while still being outfitted with a comfortable fabric strap as opposed to rubber. Whichever strap or bracelet you choose, the Black Bay Chronograph is an exceptional looking timepiece. 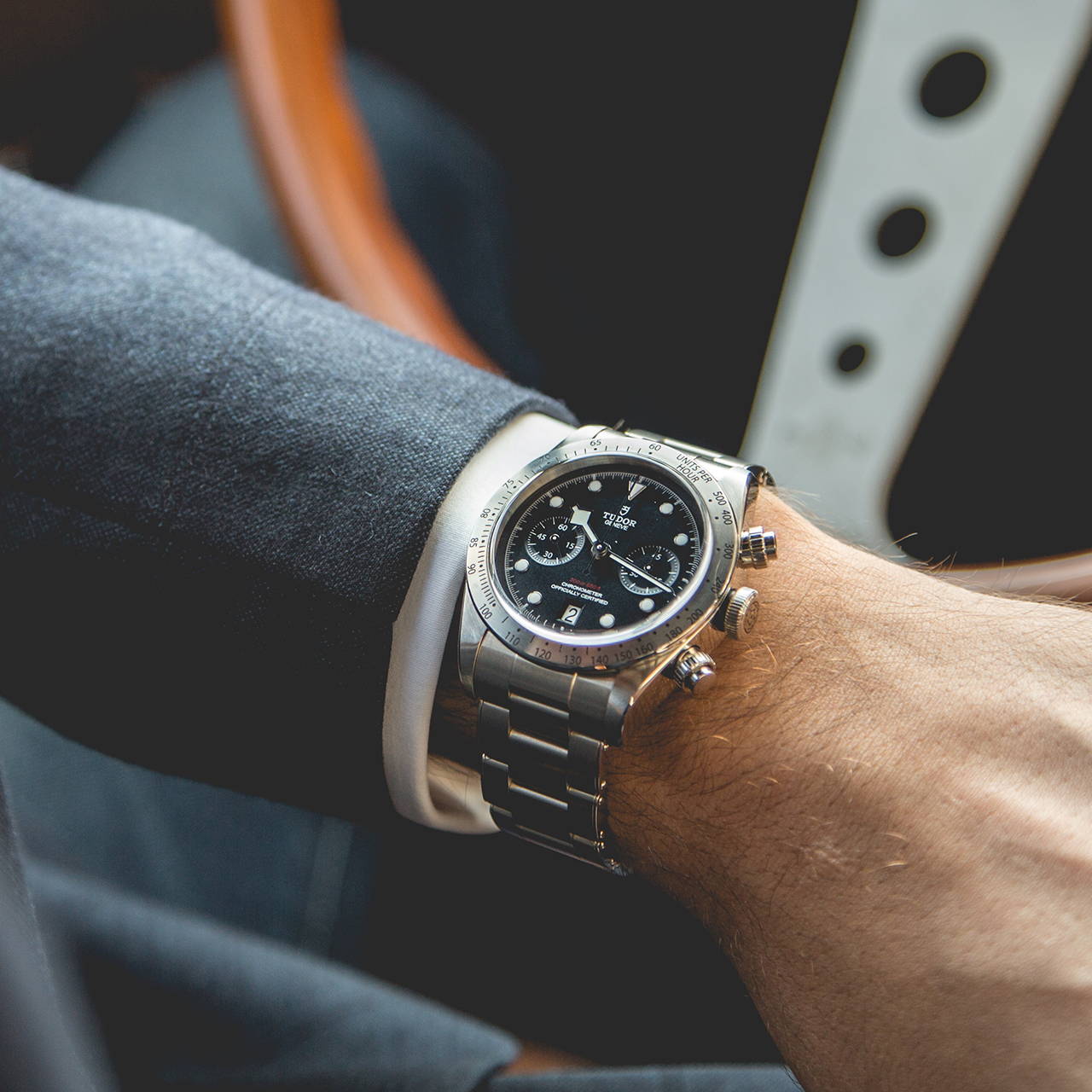 While many watch manufacturers would be content to update the color on one of their popular timepieces, TUDOR is no normal producer. With a clear update towards improving the original design, keeping what works, and combining the heritage of motor sport and dive, the new Black Bay Chronograph is an exceptional timepiece with a stunning new look.